How to Read and Write NTFS Drives on Mac For Free

Cross-platform incompatibility has been a huge roadblock for Mac users who have to move back and forth between Windows computers and Mac computers, especially when you need to share files between Windows and macOS using an NTFS(stands for NT File System) drive.

After you connected the Windows disk with NTFS format to the Mac, you found that you could read NTFS files on Mac, but you couldn't edit, rename, paste, delete, create, or move files to the NTFS drive on Mac because Mac doesn't support NTFS write by default. 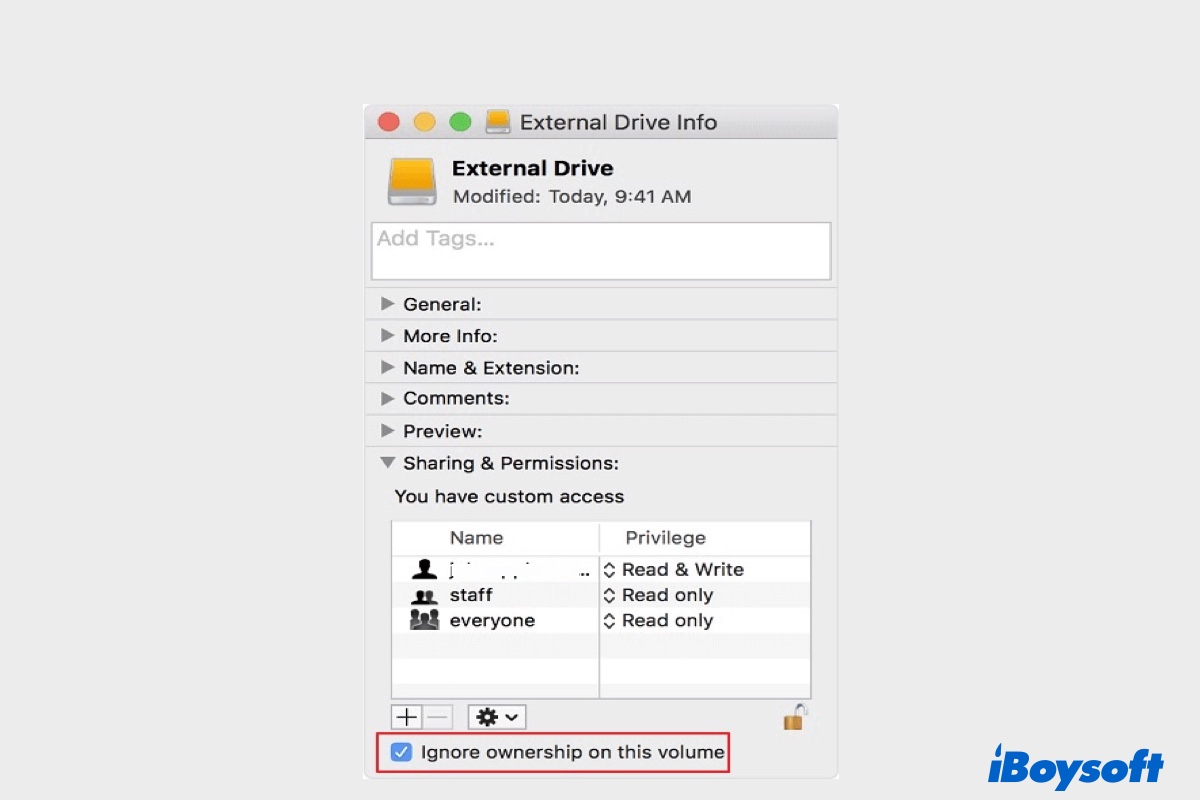 How to Delete Files from Seagate/WD/Toshiba External Hard Drive on Mac?

This post tells you what to do if you can't delete files from external hard drives on Mac, including NTFS-formatted drives.  Read more >>

Is there a way to read and write to NTFS on Mac? You can directly format the Microsoft NTFS drive to a file system supported by macOS, while you will lose all the files stored on the drive. Keep reading to know the different methods in this post to fully access and use NTFS drive on Mac if you don't want to format the NTFS drive for Mac.

Apple announced the nineteenth major release of macOS - macOS 13 Ventura on June 6, 2022, and the official release to the general public was sent on October 24. It turns out that the macOS Ventura beta still doesn't support writing to NTFS drives. Just like on macOS Monterey or earlier versions, Apple has limited support for the NTFS format, you can only read files on the NTFS drive but can not write to them.

No matter what Mac computer you are using, either a desktop or a laptop, and no matter which version of Mac operating system is running on your Mac, macOS, or Mac OS X, you can read NTFS on Mac.

How to Read NTFS on Mac

The file will appear of the same quality as it does on a PC, but you can't make any changes to it because a “Read-only” or “Locked” sign shows beside the file name.

We introduce 3 ways to change the read-only state NTFS drive to both readable and writable. You will be able to use the NTFS disk on Mac like using it on a Windows computer with full read and write access.

How to write NTFS on Mac

This part talks about how to enable Mac NTFS write support. Each method has pros and cons. You can choose the method that suits your case best to enable NTFS write on Mac. The 3 methods to grant NTFS write access on Mac include:

Method 1. Write NTFS on Mac with an easy-to-use NTFS driver

Using a commercial third-party app is the easiest and fastest way to enable NTFS write support on Mac without formatting NTFS drives to a compatible file system. Although costing a little money, it offers high reliability, fast write speed, excellent compatibility, and free technical support. These benefits you probably won't get from free NTFS drivers for Mac.

iBoysoft NTFS for Mac is one of the best. It provides fast macOS NTFS write and file transferring speed. You won't feel any difference between using a Microsoft NTFS drive on Mac and other macOS-supported formats. And now, it also supports writing to NTFS on Mac with Apple silicon M1 or M2 chips.

There is a tutorial video about how to read NTFS on Mac and gain Mac NTFS write access with iBoysoft NTFS for Mac. This video tutorial can also help you fix the USB drive is read only Mac problem.

Steps to read and write to NTFS on Mac:

1. Free download and install iBoysoft NTFS for Mac on Mac.

2. Connect your NTFS drive to your Mac computer.

3. After your drive is mounted successfully, you can access NTFS disk on Mac and read/write NTFS files. If necessary, you'll be asked to install an NTFS driver by iBoysoft and enable System Extensions to gain full disk access. 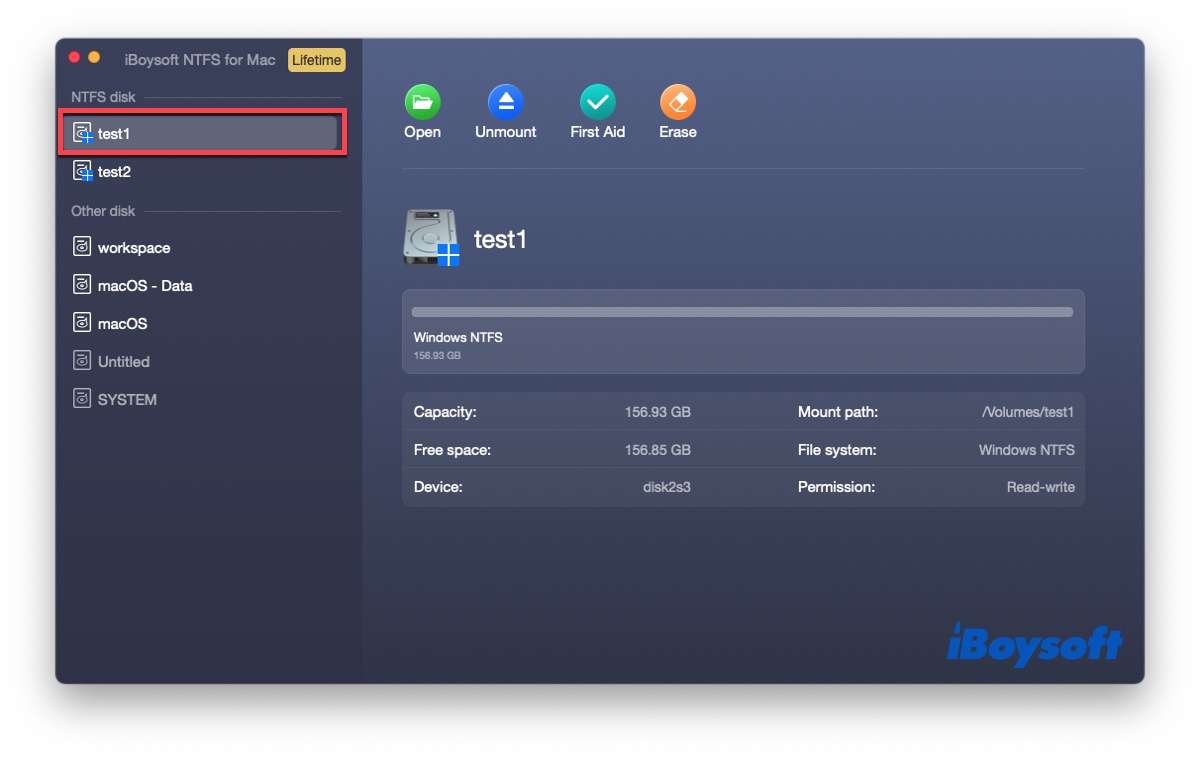 There is a free-trail version of iBoysoft NTFS for Mac. Don't lose this chance to experience its excellent performance to write to NTFS on macOS for free.

This wonderful software is also available for any other NTFS hard drive, for example, the WD My Passport NTFS drive, as long as you install a wonderful iBoysoft WD NTFS driver for Mac on your device. 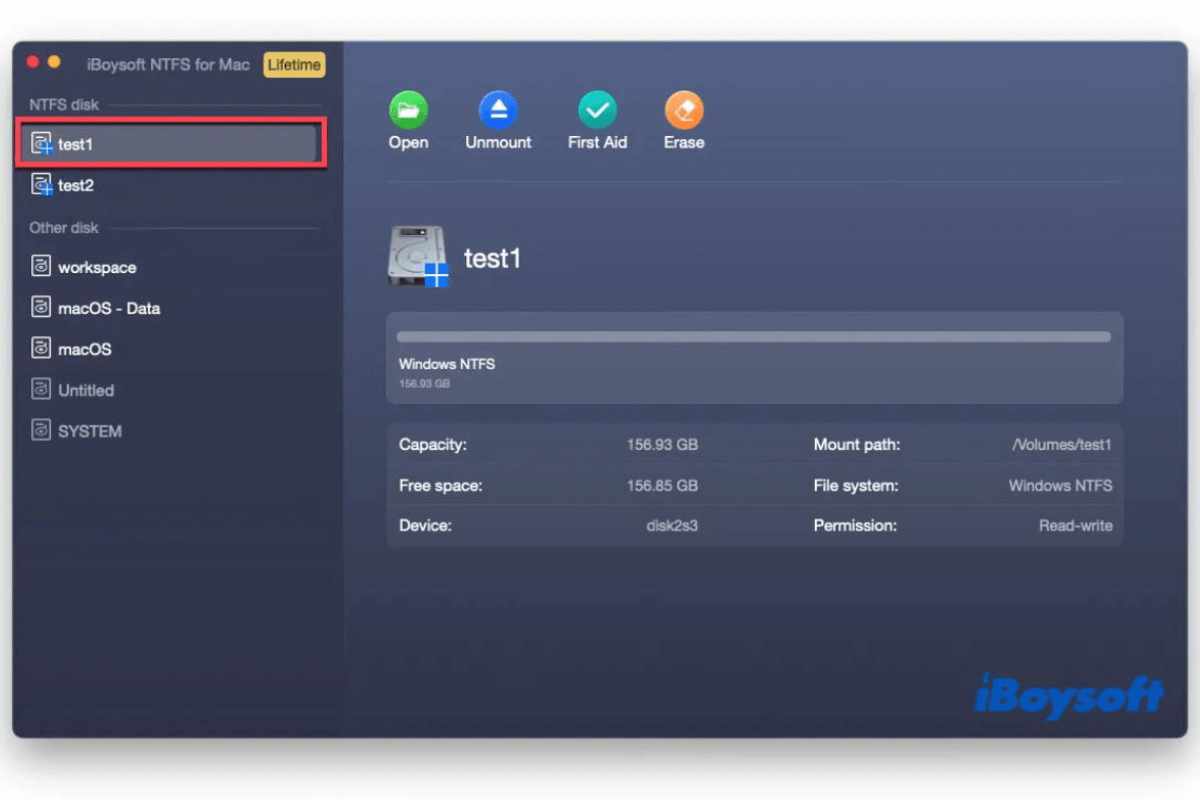 What is NTFS for Mac and do you need it?

This post tells you what NTFS for Mac is and almost everything about it. You can follow this post to get complete learning about it. Read more >>

If you don't want to use a commercial NTFS driver for Mac or format NTFS, there are some free NTFS for Mac you can choose from. For example, you can use an open-source project called FUSE for macOS. It can mount the Microsoft NTFS drive in read-write mode.

Although they are free to use, the process is very complicated and technical, involving so many command lines and rebooting the Mac. If you want to try such a free program, please follow the guide very carefully and all attempts are at your own risk.

Go to the Terminal window and run the following command:

Then, Hit Enter to install it (provide the password when prompted).

Use default options when installing it.

SIP exists to protect the operating systems from unauthorized changes.

Step 6. Read and write to NTFS on Mac.

Note: It is recommended that you enable SIP after you finish using NTFS on Mac to better protect your Mac. To enable SIP, you just need to follow Step 5 and run the command line "csrutil enable" in the Terminal window, hit Enter, and restart the Mac.

Other than FUSE for macOS, Mounty for Mac, NTFS-3G, SL-NTFS are other free NTFS for Mac. They are free, but all of them require a good bit of work to install and use.

However, Apple hasn't officially supported NTFS-writing ability yet. It is proven to be unstable and risky. It may cause disk corruption and permanent data loss. In case you couldn't access your NTFS drives or lost data from them, try iBoysoft Mac Data Recovery to recover important files.

This solution is not recommended, but if you are curious about how to enable write support for specific Microsoft Windows disks using macOS Terminal, follow the steps below:

1. Go to the Applications > Utilities > Terminal to launch the Terminal program.

2. Input "sudo nano /etc/fstab" to edit the fstab file (provide your password when prompted). No letters will show up when you type in password.

3. Type "LABEL=DISKNAME none ntfs rw,auto,nobrowse" in the editor window for the fstab file and press "Control + O" to write. (Be sure to change the word DISKNAME to the name of your NTFS drive)

Tips: If you have multiple NTFS drives you want to write to, write different lines for each NTFS drive. 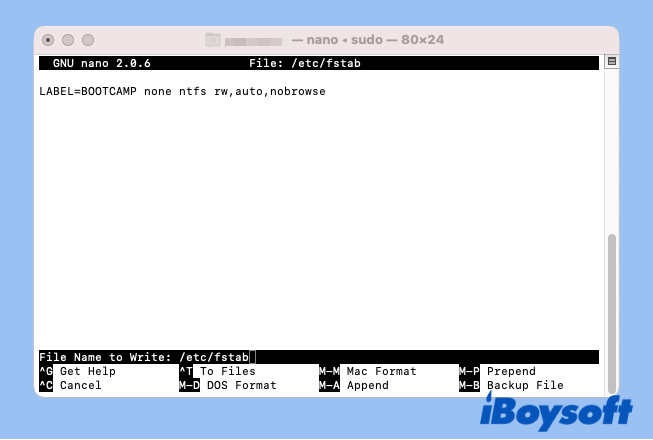 5. Re-connected the NTFS drive to the Mac.

7. Type in /Volomes and hit Enter.

8. Find the NTFS volume or drive and drag it to the sidebar for easy access.

Tips: If you want to undo the change, follow step 1 and step 2, then delete the command line. Save your change and exit.

1. Open Terminal and input the command sudo umount Volumes/DISKNAME and hit the Return key to unmount your disk. Replace the DISKNAME with the name of your device.

2. Run the command sudo mkdir /Volumes/1 to create a mount point for your NTFS volume.

3. Run command sudo mount -t ntfs -o rw, auto, nobrowse /dev/disk2s2 /Volumes/1 to mount the NTFS on Mac computer in read and write mode. The "disk2s2" is the Device info of the NTFS drive in Disk Utility. Yours might be different. 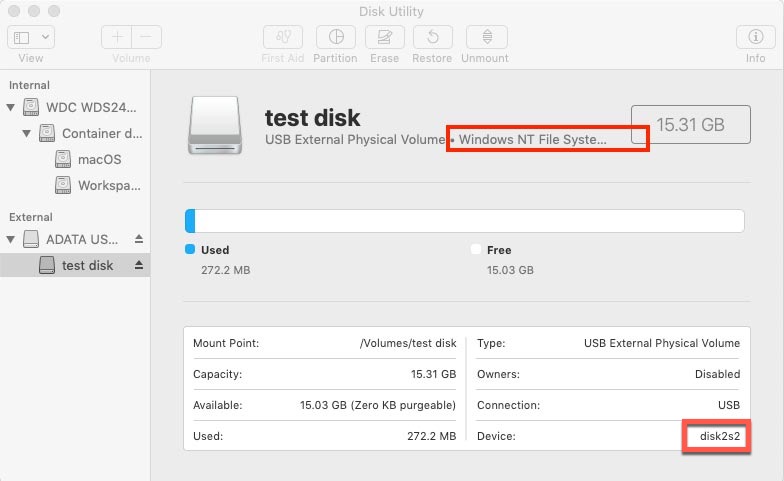 4. Quit the Terminal and open NTFS volume on Mac for use. 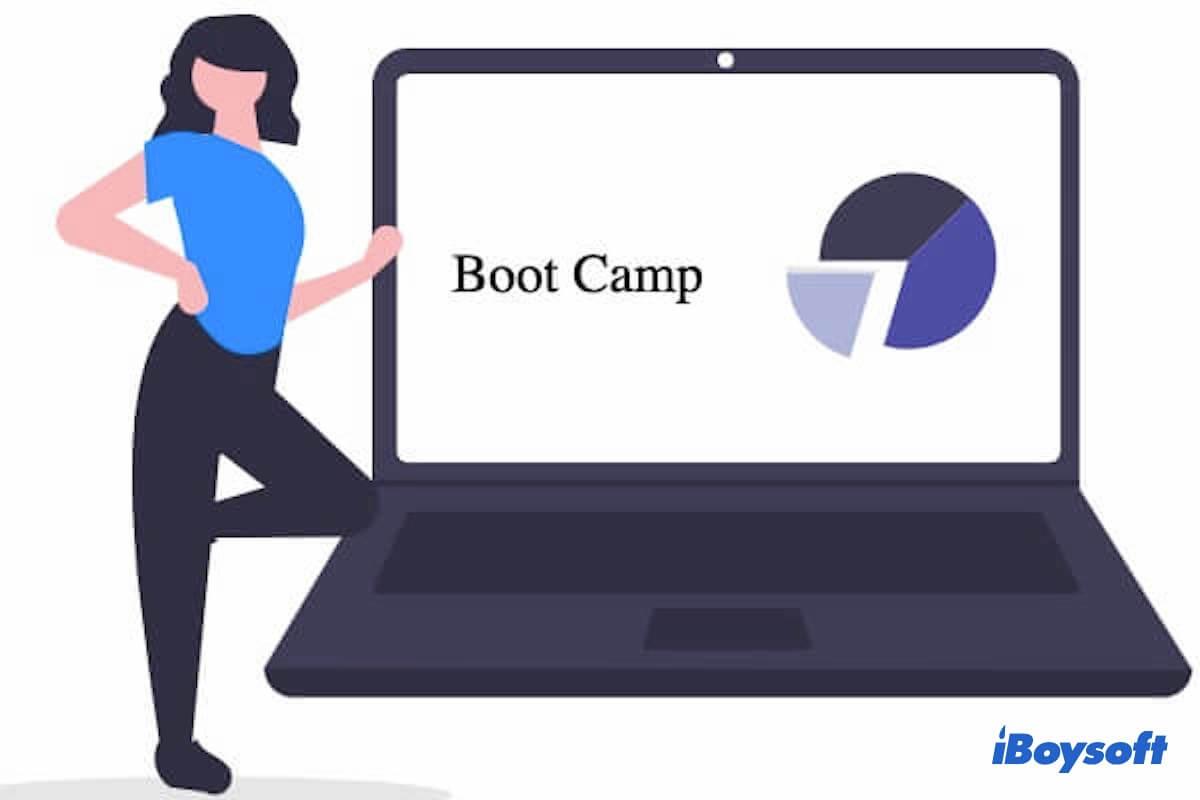 How to Mount BOOTCAMP NTFS Partition with Read-Write Access?

Tutorial to mount BOOTCAMP partition in read-write mode by using command line or with NTFS for Mac software in macOS and Mac OS X. Read more >>

Letting Mac read NTFS and write to NTFS files is totally possible. In addition to changing the file system by formatting which erases all the contents, you have several options to choose from - free NTFS drivers, cost-effective NTFS drivers, and Apple's native NTFS support.

Free NTFS drivers for Mac and Apple's NTFS support are free but take an extra amount of work to mount NTFS drive on Mac in read-write mode. They are risky and very unstable. Even though iBoysoft NTFS for Mac is not completely free, it saves you a lot of time and effort with its excellent reliability and ease of use.

If you need to use the external drive for file transferring between Windows computers and Mac computers frequently, it is a good idea to format NTFS to exFAT or FAT32 in macOS Disk Utility. If you will use this Windows NTFS drive on Mac later, you can also choose to convert NTFS to APFS. 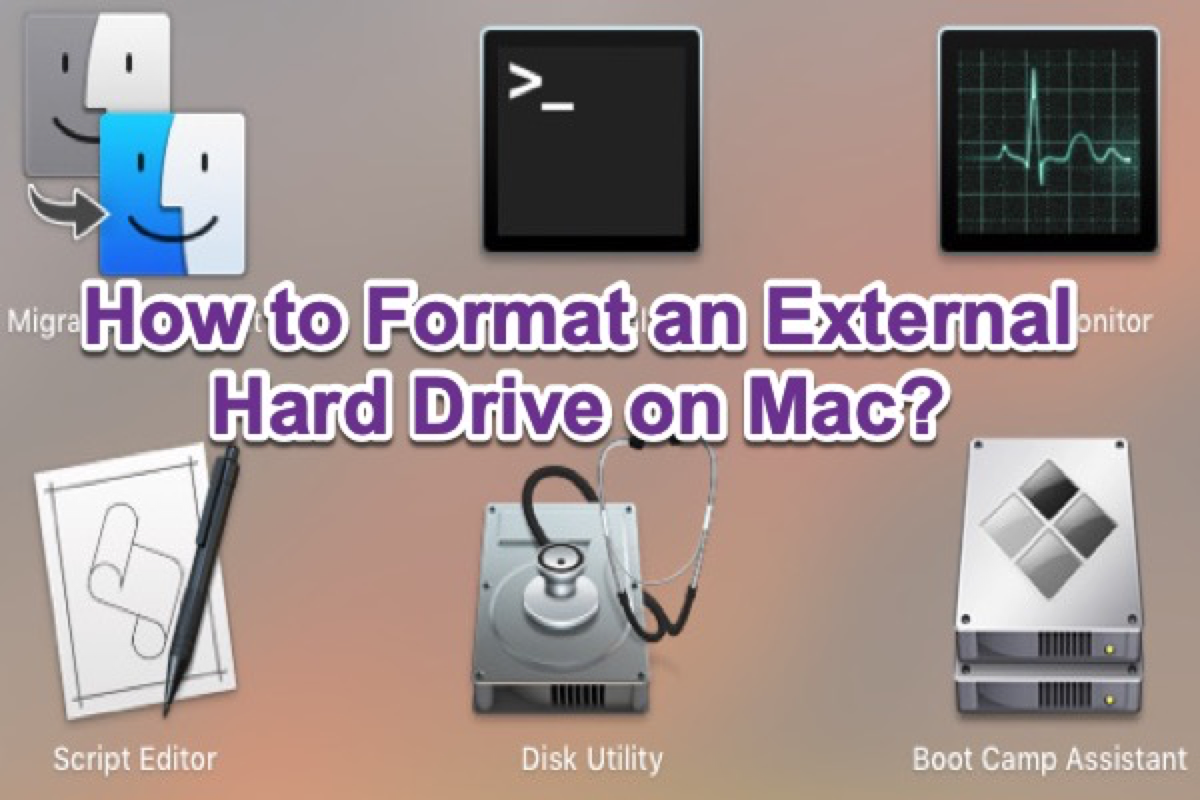 How to Format an External Hard Drive on Mac?

This article tells you how to format NTFS on Mac and erase any other external hard drives on Mac with the best format. Read more >>

FAQS about NTFS on Mac

QDoes NTFS work on Mac?
A

macOS only supports reading NTFS on Mac. You can view the stored files on the Windows NTFS disk on Mac. However, you can not move, copy, edit, etc., the files on NTFS drives on Mac by default.

QCan a Mac write to NTFS?
A

You are not allowed to directly write to NTFS on Mac. But there are some workarounds you can apply, including using third-party NTFS driver for Mac and enabling the Apple;s NTFS support in Terminal. It is recommended to choose the commercial but easy-to-use iBoysoft NTFS for Mac to access NTFS drive on Mac.

SSD not mounting in Power Mac G5, how to fix it?

If your SSD doesn't mount or show up on Mac, you'll find the solutions in this answer.

NTFS external hard drive will not mount after updating to macOS Catalina 10.15.7, how to fix it?

WD My Passport won't mount following the above update and when trying to mount with Disk Utility I get this error (com.apple.DiskManagement.disenter error 49221.) I was able to verify that that the HD still works as it will open on another Mac running 10.15.7. Any suggestions or fixes out there?

Why is macOS Unable to Mount the External HDD?

macOS is unable to mount the external HDD. I am fed of these things happening again and again.

Mac Mini not mounting external hard drives, what to do? Help, please!

Any way to recover files from a hard drive that won't mount? Is IBoysoft legit? : mac

This thread explains whether it's safe to employ iBoysoft Data Recovery to recover data from an unmoutable external hard drive.