Summary: What to do if you want to edit your NTFS-formatted WD My Passport drive on Mac? Be easy, this article from iBoysoft guides you to download and install the WD NTFS driver for Mac: iBoysoft NTFS for Mac to read/write your WD My Passport hard drive on Mac. 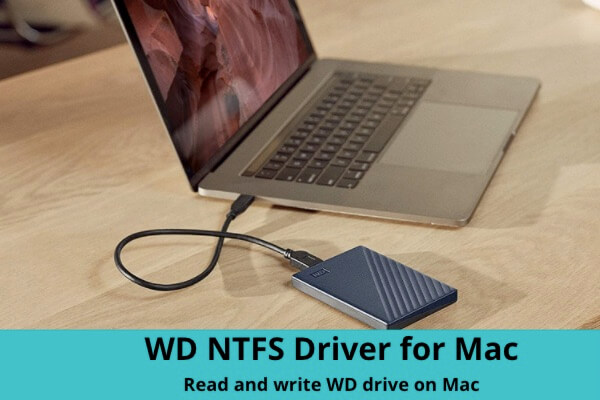 The NTFS is the most widely-used Microsoft file system in the world. Due to its copyrights, Mac users always get awkward that they cannot write to the NTFS-formatted WD My Passport hard drive on Mac devices. Frequent formatting is not advisable for it causes data loss and disk damage.

In such a case, you'd better install an NTFS driver to write to WD NTFS hard drive on Mac. This article teaches you how to free download the WD My Passport NTFS driver for Mac in detail.

Think this article helpful? Share it with more people!

What happens when you run an NTFS-formatted WD drive on Mac?

Before knowing what will happen when you want to use an NTFS drive on Mac. Let's view an example first.

I have a WD My Passport 2TB Portable external hard drive used on a Windows laptop before. This external hard drive is NTFS pre-formatted. Recently I switched to a MacBook Pro with macOS 11 Big Sur, I found I could read it on Mac, but I couldn't transfer files between the Mac and the WD drive.

This WD My Passport read-only on Mac problem is common. Actually, you're really restricted when you want to make any further changes to your NTFS drive on Mac:

Annoyed by these restrictions, formatting the NTFS drive to APFS might hit your mind. But it's not recommended because you will suffer data loss as long as you format the external hard drive on Mac.

Find it useful? Share it with more friends right now!

What does iBoysoft NTFS for Mac allow you to do on your device?

As an NTFS for Mac toolset, iBoysoft allows you to use the NTFS drive like the APFS drive on your Mac nicely. You can read more to know what exactly you can operate to your NTFS drive on Mac with it.

Read and Write to WD NTFS Drives on Mac

Specifically, with iBoysoft NTFS for Mac, users can write to, edit, delete, copy, paste, and view files stored on the NTFS drives on Mac seamlessly and natively.

In addition to writing to the NTFS drive, iBoysoft NTFS for Mac can also mount, unmount, and eject all WD external hard drives and SSD with a single click. It's a menu bar utility that automatically mounts NTFS drives after you allow it.

Erase WD drives to the NTFS file system on Mac

Also, this utility bridges the gap of erasing disk to the NTFS file system on Mac.

As we all know, Disk Utility on Mac doesn't allow users to erase the disk to the NTFS file system when choosing the disk format, and it definitely brings lots of inconveniences to Mac users and fans.

Now, we can erase an NTFS disk on Mac easily with the assistance of iBoysoft NTFS for Mac software.

How to use iBoysoft NTFS for Mac to read/write to WD drives on Mac?

Note: If the NTFS disk still can't be read and written to, a pop-up will require you to install an NTFS driver by iBoysoft and enable System Extensions. Then, you can edit files on the NTFS drive freely.

You're not allowed to write to the WD drive with the NTFS file system on macOS. In order to fix read-only WD hard drive on Mac, you have to format this drive to a Mac-compatible file system first.

Or, you can install an iBoysoft NTFS for Mac application to write to WD NTFS hard drive on Mac, which is more recommended for data safety and disk performance.

Share to let more people know about this wonderful article!

QWhat is WD NTFS driver for Mac?
A

QHow do I get my WD NTFS hard drive to work on my Mac?
A

NTFS external hard drive will not mount after updating to macOS Catalina 10.15.7, how to fix it?

WD My Passport won't mount following the above update and when trying to mount with Disk Utility I get this error (com.apple.DiskManagement.disenter error 49221.) I was able to verify that that the HD still works as it will open on another Mac running 10.15.7. Any suggestions or fixes out there?

How can I prevent second the [internal] hard drive from mounting at boot?

This answer explains how to prevent the second internal hard drive from mounting at startup on Mac.

Why is macOS Unable to Mount the External HDD?

macOS is unable to mount the external HDD. I am fed of these things happening again and again.

What to do with my external hard drive not ejecting and mounting on macOS?

WD Elements 2TB external hard drive not ejecting or mounting on Mac? Read this post to know how to fix it without losing data.

Here, we tell you how to fix a Toshiba external hard drive that is not mounting on Mac without losing data.

How do I fix WD external drive could not mount on Mac?

Troubleshoot the WD My Passport for Mac drive not mounting problem, and explain why the WD external drive won't mount on Mac.