How to Mount NTFS Drive on Mac with read-write access?

How to mount an NTFS-formatted external hard drive on Mac?

Summary: This article will show you how to mount NTFS drives on Mac to read and write data to it. Since NTFS drives are not write-supported on Mac, you need iBoysoft NTFS for Mac to modify your files. Download it and start your free trial today! 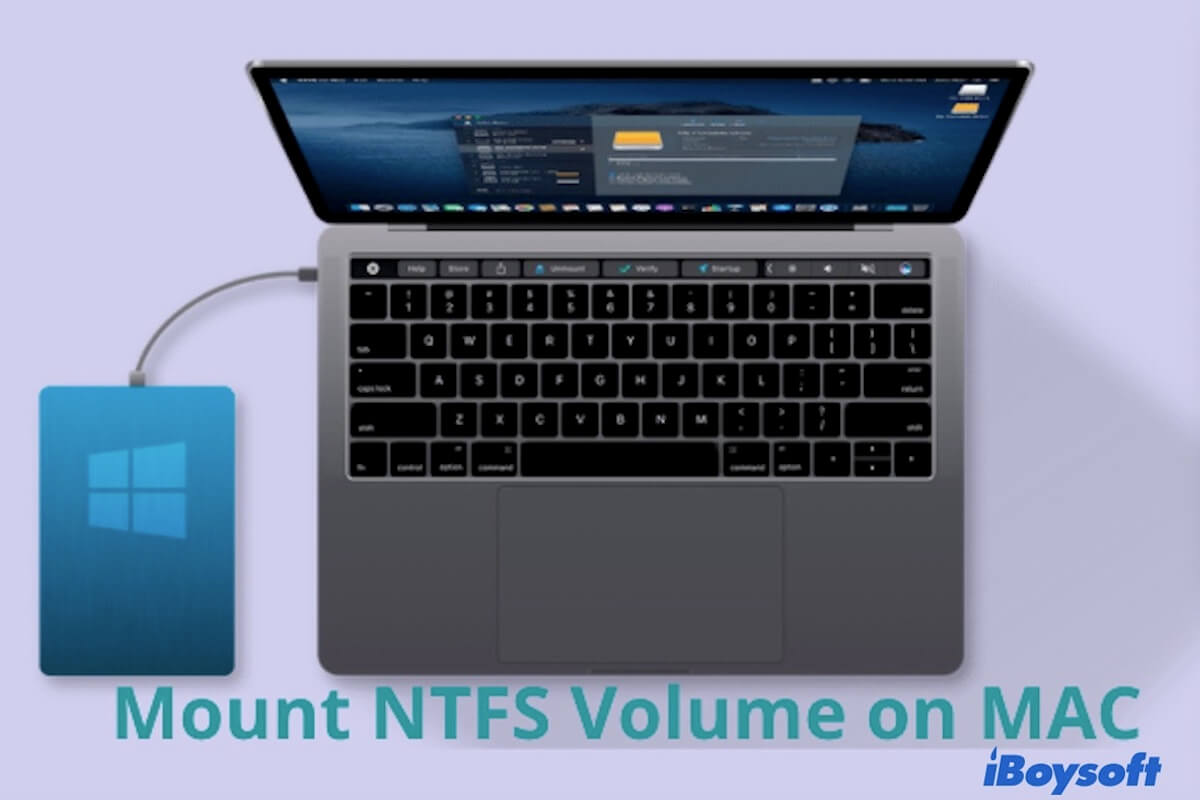 By default, macOS mounts Windows NTFS volumes in read-only mode, so users can't write to NTFS volumes or drives in macOS. Thus, it is a hassle when you try to move a file from Mac to Windows NTFS drives because of Mac external hard drive read-only state.

Some prescient users choose to format the external hard drive for Mac and PC before they put files on this disk. But for people who have saved many important files on the NTFS drive, formatting is not a good suggestion to make NTFS drive writable on Mac in this case.

Then, is there a way to mount NTFS on Mac with read-write support when you open NTFS drives on Mac?

Can you mount Windows NTFS drives on Mac?

Yes. You can mount NTFS and read NTFS drive on Mac but with read-only permission.

Mounting means that the operating system makes files and directories on a storage device (such as an external hard drive, an sd card, or a USB flash drive) available for users. Usually, when you plug an external drive into your Mac, the macOS will automatically mount it so that you can view and write to files on this drive.

However, if you connect an NTFS-formatted external hard drive to your Mac, you will find this disk is mounted but in read-only mode. That's to say, you are unable to edit, delete, copy, remove, or do any other operations except for viewing, just like the users below.

My Seagate USB drive (NTFS format) is shown in the Finder (under Mac OS X El Capitan 10.11.5) with info that I have read-only access. I googled for solutions to write access to this NTFS drive. Unfortunately, as a real Mac noob, none of my attempts to fix the read-only drive worked. Also, I don't want to format this disk. What can I do to write to my NTFS formatted drive on Mac?

So, if you want to mount Windows NTFS-formatted external hard drives on Mac in read-write mode, here are three ways you can have a bash. 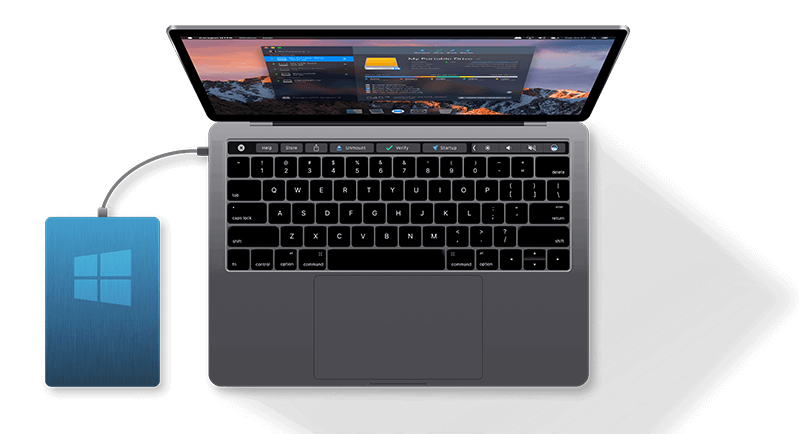 How to mount NTFS external hard drives on Mac in read-write mode?

In addition to being an NTFS for Mac mounter, iBoysoft NTFS for Mac is a great disk management tool for NTFS drives as well. It can mount and unmount serval external drives in one click, as well as repair and format NTFS drives on Mac natively and easily.

How to use iBoysoft NTFS for Mac to mount NTFS drives on Mac?

Step 1: Download, install and launch iBoysoft NTFS for Mac on your computer.

Step 2: Connect your Windows NTFS external hard drive to your Mac. Then, you'll be able to open your NTFS drive and write to it after the drive has been mounted successfully.

Note: If the NTFS disk can't be mounted in read-write mode after installing the software, follow the pop-up to install an NTFS driver by iBoysoft and enable System Extensions first.

Free NTFS software for Mac option, FUSE for macOS, is less reliable than paid NTFS mounter for Mac. Moreover, it involves complicated command lines and an installation process, which could be a lion in the way if you are not good at the command prompt.

Here are the details about how to mount NTFS drives on Mac with FUSE for macOS.

Warning: The following instructions assume that you know how to use the Terminal. Doing this with the wrong command line could damage your Mac operating system.

Step 1: Disable SIP if you are running macOS 10.13 and newer, which will put your Mac in a vulnerable place.

Step 2: Download FUSE for macOS at GitHub.com and install it. 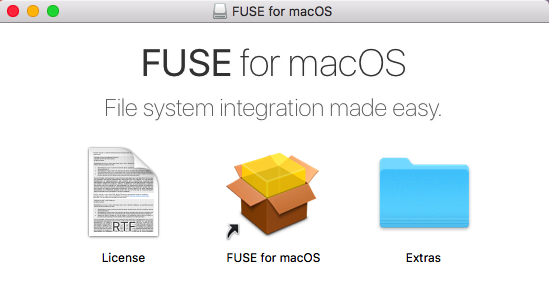 Step 4: Simply click Go at the upper right of your desktop, choose Utilities, then find Terminal and open it.

Step 5: Type in brew install NTFS-3g in the command prompt and hit Enter to install NTFS-3G from Homebrew. You need to provide the password when it is asked.

Step 6: Type in sudo mkdir /Volumes/NTFS in the Terminal and hit Enter to create an NTFS mount point.

Step 7: Type in diskutil list and hit Enter to list the volumes connected to this Mac, then you'll find the name of your NTFS volume. (For example, the identifier is disk3s1.)

Step 8: Type in sudo /usr/local/bin/ntfs-3g /dev/disk3s1 /Volumes/NTFS -olocal -oallow_other and hit Enterin the command prompt. (Remember to replace disk3s1 with the name of your NTFS volume.)

After these operations, you'll find your NTFS volume of the external hard drive is mounted on your desktop with read-write access.

However, as you can see, it is complicated because you can only mount one NTFS volume each time. And it is risky if you are a Mac-noob who knows little about the command line. Moreover, you need to disable SIP and unlock the encrypted APFS volume if your Mac is running macOS 10.13 or above.

To sum up, Mounting NTFS on Mac in this way is so complicated.

Even though it's a free mounter to mount NTFS formatted external hard drives on Mac, it is not recommended due to the complication and potential risk.

Solution 3: Enable the experimental NTFS support in macOS [Not recommended]

Actually, Mac does come with NTFS read-write support but it is disabled by default. This way to mount NTFS in macOS and Mac OS X is the least tested, so it has an unstable performance.

Therefore, you are not advised to conduct this solution if you have important files saved on this NTFS drive, in case you lose data during this process.

Well, if you want to know the exact details out of curiosity, back up your files first and do the following steps.

Warning: It will involve the command line to enable NTFS write support in macOS. So, if you are not good at the Terminal, you'd better not try this out. It's very easy to input a wrong command and result in unexpected damage to your Mac and the data inside.

Step 1: Click Go on the upper right of your desktop and go to the utility folder, then launch the Terminal program.

Step 3: Type in LABEL=DISKNAME none NTFS rw, auto, browse, and hit Enter in the editor window for the fstab file. (You need to change the word DISK NAME to the name of your NTFS external drive.)

Step 5: Unmount this NTFS external hard drive and reconnect it to your Mac again.

After this, this NTFS drive is mounted successfully on your Mac, but it won't pop up automatically and shows up on your desktop like other drives normally do. Instead, you need to access it in the Finder window.

Step 2: Type /Volumes in the box and hit Enter.

You can view NTFS drives as they will be showing up under the "/Volumes" directory, and you can read and write to files on this drive. But still, you can only mount one NTFS drive each time with so many steps.

In conclusion, a paid NTFS for Mac driver is the best solution to mount Windows NTFS formatted external hard drives in reading and write mode. You do not need to move from NTFS to APFS.

Software like iBoysoft NTFS for Mac is simple and efficient for inexperienced users. Freeware to mount Windows NTFS drives on Mac is not well-performed, and users could lose data when a disk is corrupted due to instability and complicated operations.