Enable NTFS Read-Write in macOS Big Sur?
You Don't Need to Be a Geek

To read and write to Windows NTFS drives in macOS, you can try iBoysoft NTFS for Mac and get full access to NTFS drives when editing, copying, deleting, and transferring files.

macOS 11 Big Sur unveiled in WWDC 2020 is one of the biggest Mac operating system updates. The system is overhauled in colors, icon designs and many other aspects. However, not a single word is mentioned when it comes to writing to NTFS in macOS Big Sur. Apple leaves this issue solved by users themselves. That's to say, every time you edit, copy-paste, or delete files on NTFS drives on Mac, the read-only issue will annoy you again and again in macOS 11.

Instead of converting NTFS to APFS or exFAT, enabling NTFS write in macOS Big Sur might be less risky in the case of data security. It helps beginners to read and write to NTFS drives on Mac.

NTFS is a proprietary file system belonging to Microsoft, which has long been the built-in file system of Windows system drive. Then why won't macOS just write to NTFS?

Indeed, Apple technical geeks had attempted to reverse engineer NTFS implementation for full compatibility with macOS. Nevertheless, no assurance could be guaranteed by such implementation. It's not stable because once Microsoft changes anything in the NTFS file system, the reverse-engineered elements won't work. The unstable Apple NTFS write support runs the risk of destroying user's data on the NTFS drive.

But reading files is a non-destructive action anyway. So, Mac OS will only read NTFS drives but won't write to them, which is still preserved in the new macOS 11 Big Sur.

How Does NO NTFS Write Support in macOS Big Sur Affect Your Life?

Even though Mac not writing to NTFS drives is a standing dish, this problem is still a lion in the way of your work and school. When you access NTFS external drives (including hard drives, USB drives, and SD cards) on Mac computers, troubles include:

Except for the possible problems mentioned above, other dilemmas also occur when you need to transfer files between the Windows PC and Mac. 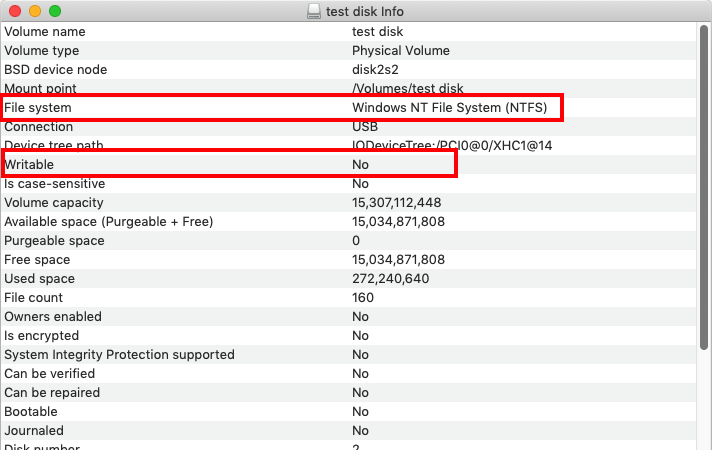 Then, can you read and write NTFS external hard drives on a Mac now?

The NTFS read-only problem still exists in mainstream Mac operating systems like macOS Big Sur, macOS Catalina, Mojave, and some older systems like Mac OS X. But should you give up using NTFS on Mac and erase your drive to other file systems?

There is no need to reformat NTFS disk with an interchangeable file system like FAT32. Or at least, you don't have to, especially when you have important files on the target disk. Disk erasure results in data loss while enabling NTFS write on Mac is at your fingertips.

Now, the NTFS read-only issue has existed for a long time, and you can mount NTFS drive on Mac with full access in several ways. Options may include the Apple experimental NTFS implementation aforementioned and open source. But those methods to enable NTFS write are often complicated and risk in losing data. Also, they can't put things once and for all.

A better choice is to find a reliable NTFS for Mac software provider. Anyway, making NTFS drives writable in macOS is not an exclusive trick of Apple computer geeks.

Among the products of changing NTFS read-only from read-write on Mac, iBoysoft NTFS for Mac is the pick of the litter. With this application, NTFS file transferring, editing, adding, deleting, and copying will as easy as pie on Mac mini/MacBook Pro/MacBook Air/iMac. Simply install, connect, and WORK!

Most of the time, you can't have your cake and eat it too. But as for Microsoft NTFS write permission and Mac operating system, you can have both necessarily. To read and write NTFS in macOS Big Sur, a reliable NTFS for Mac software like iBoysoft NTFS for Mac will be the best option with reliable performance and the least risk of file corruption.