Be it a Mac mini, iMac, MacBook Air, MacBook Pro, or M1 Mac, it could boot into a black or blank screen. It's known as the black screen of death. In some worse cases, the Mac won't turn on at all. 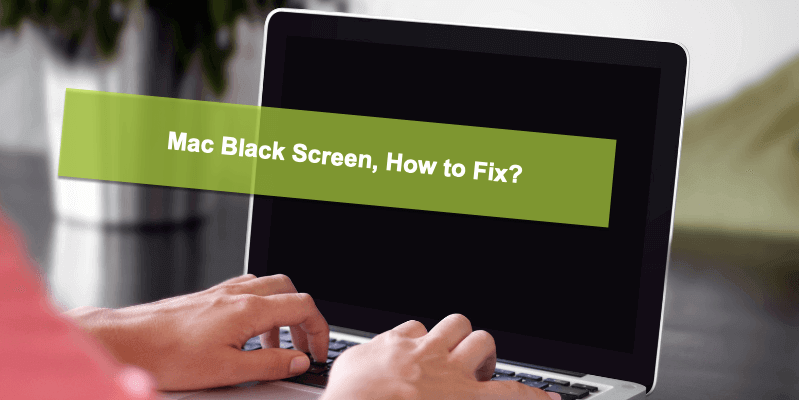 You open the Mac computer and press the power button, only to find that the Mac won't power up. It shows a black screen and is not responding. Probably, you can see a white cursor on the black screen while you slide on the touchpad.

In this situation, what can you do to fix the Mac black screen issue? This tutorial will clearly show what causes the black screen on different Mac models. And more importantly, you can fix it if you're in one of the following issues and turn your Mac computer on properly.

The causes of black screen can be varied from one another. There are three major causes.

Note: Black scree in upgrading macOS 11 requires more time to set up your Mac. If your Mac doesn't response after a relatively long time, then read through the following solutions.

In addition, there are still some unknown reasons caused by motherboard failure that people cannot tell. And depending on the model and age of your Mac computer, except for the black screen of death, you might see a blank, gray, or blue screen.

MacBook Air and MacBook Pro are both welcomed for Retina display and keyboards. When such a Mac laptop doesn't power up but boots into a black screen, you can try these solutions.

1. Check the power of your MacBook

Sometimes, the Mac notebook plays no startup chime at startup but shows a black screen only. In this case, the first step is to check if your Mac is charged with enough power. You can plug in the charger and wait for minutes and press the power button. But in some cold environment, you need to warm up the back part of your computer first.

Also, you need to make sure the charger cable is OK when your Mac is charging. You should check your battery cycle to see if it needs to be replaced as well. Then, try a hard restart on your MacBook. 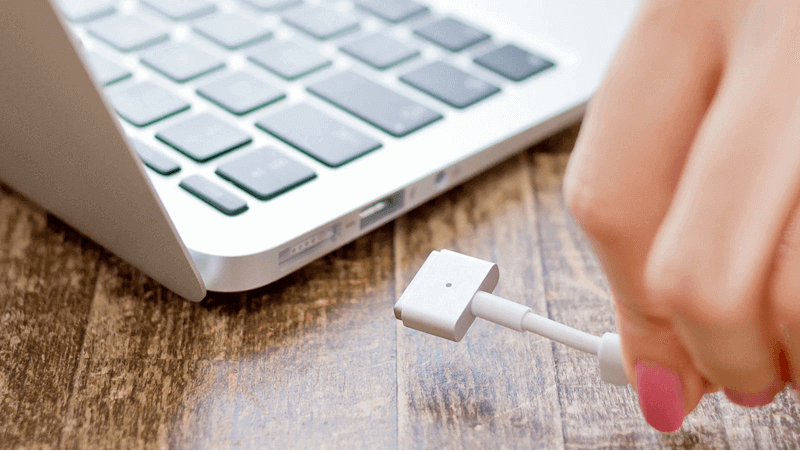 To force restart a MacBook with physical function (F1-F12) keys, you need to first find the power button at the upper right corner. If you are using an older Mac with an optical drive, this is also the Eject button. And for MacBook Pro with a Touch bar, the power button is the Touch ID on the right side of the Touch bar.

After you find the power button of your MacBook Air or MacBook Pro, you can restart your Mac by:

Then, your MacBook should not boot into the black screen but power up as usual.

2. Perform a Power Cycling on your MacBook

If you can hear some spinning noise from the hard drive or fans at startup, it means that the black screen issue is not caused by the lack of power. You can try the magical power cycling.

For some older MacBook like MacBook Air 13" and MacBook 13" whose battery is removable, you can forcibly shut it down, unplug it, remove the battery, and wait for seconds. Then you need to put the battery back and restart the Mac.

3. Wake up your Mac from sleep mode

Probably, your MacBook gets stuck on the login screen and then gets into sleep mode. For such MacBook Air black screen issue, you usually will see the cursor. To wake your Mac from such a dilemma, you can type the first letter of the user name and hit the Enter. Mac will recognize that you type in the wrong information and give you a response, and consequently, it will withdraw from the black screen situation.

Sometimes, a MacBook Pro black screen doesn't necessarily mean that the Mac is not turning on. Instead, you can check the display in two ways.

If you have recently update or upgrade the Mac operating system or any other software, the black screen issue might be caused by a software incompatibility. To solve this problem, you can: 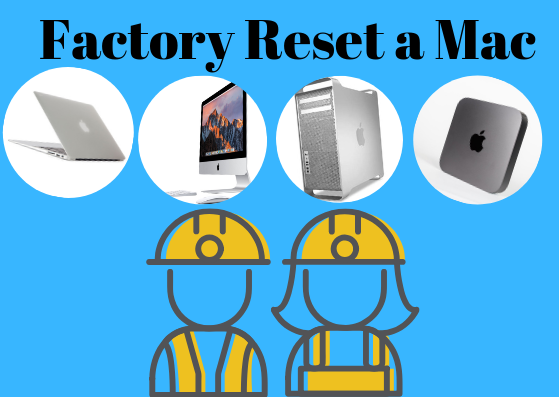 How to factory reset a Mac without losing data?

Is your Mac not working properly? You may want to reset the Mac to its factory defaults and fix some problem.

The Mac black screen issue may be caused by loose contacts between hardware, especially if you have dropped the computer or have opened your MacBook Air or MacBook Pro for any updates. You can ask a specialist to help you open the Mac and reconnect them again. 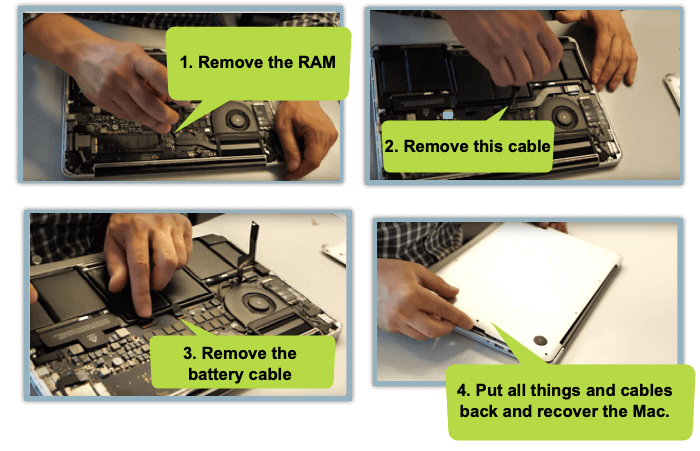 Hopefully, your Mac notebook will start up normally with a loading bar again.

How to fix the iMac black screen?

Even though iMac is packed with the latest processors, faster memory, Retina display, and phenomenal graphics, it can't avoid the iMac black screen issue still.

When your iMac boots into a black screen, you can first try to restart the iMac.

You can also perform power cycling for your iMac desktop to fix the black screen issue.

3. Check the RAM of your iMac

What's more, you can try to check your RAM and see if it's loose or dusty. It's easy by following these steps (e.g. iMac Intel 27" Retina 5K Display) since iMac is a total package.

Tips: Instead of putting the old RAM back in, you can also upgrade the RAM model per your requirement in step 6.

Also, if you have recently updated your iMac to a new macOS and had the black screen problem since then, you can try to reinstall the macOS.

If your iMac is still not turning on properly, you can check the software incompatibility. You can also try these to fix the black screen issue.

Not only iMac, MacBook Air and MacBook Pro would boot into a black screen, Mac mini could also get stuck with the same problem. If your Mac mini desktop is facing this problem, try those solutions.

If your Mac mini doesn't power up but shows a black screen, you can first try a reboot.

2. Check all connections of the Mac mini

Mac mini works like a host engine of a computer. That's to say, all your mouse, keyboard, and display are externally connected to the mini case. And those devices could cause a slow or frozen Mac. So, when your computer goes to a black screen, you can check the connections.

I. Check if your Mac mini box and the display is connected with power when the Mac screen won't turn on. It's easy because you will see the lights on if they are powered up. You should make sure your wall outlet, transformer board, and power cable is working.

II. If the power connection is in good condition, you can disconnect unnecessary peripherals including USB hard drive, mouse, keyboard, and other Thunderbolt devices

After removing all peripherals except for the display, you can press the power key to reboot your Mac and see if it can boot up normally.

3. Check the hardware you update recently

Mac mini allows users to replace and update hardware easily. However, some incompatible updates could cause boot failure like a black screen. For instance, you are a Mac guru who is familiar with the Mac mini box structure. And you have recently upgraded the RAM by yourself. But now the Mac mini goes black screen.

When your Mac screen keeps going dark, you can:

If you use an external display on your M1 Mac but it stuck on black screen after restart, you can:

If you use the built-in monitor on your M1 Mac and it won't go past the black screen, you can:

How to Reset your M1 Mac to Factory Settings

Ways to factory reset your M1 Mac mini, MacBook Air, and MacBook Pro and reinstall macOS Big Sur when you need to replace it or the Mac is bricked. Read more >>

No matter what computer you use, boot failure like Windows black screen and Mac black screen is inevitable. But when your computer boots into the black screen of death, it's not the end of the world. You can find some solutions and solve this problem either by yourself or with the assistance of an Apple store specialist. Anyhow, when your Mac won't boot, please firstly check whether you have a file backup or have recovered files from the Mac hard drive before any repair.

Was this article helpful?YesNo

Was this article helpful?

We appreciate your kindness of sharing your personal experience to help others solve their problem.

We value your suggetstions to help us further improve this article.