How to Fix Mac Stuck on White Screen of Death?

An unexpected situation happens - your Mac goes to a white screen when booting. It seems like that your Mac, like MacBook Pro, stuck on a white screen due to hardware issues. In fact, the causes are various.

No matter your Mac mini, iMac, MacBook Air, or MacBook Pro stuck on a white screen, this page will help you fix the issue without data loss and restart your Mac normally. 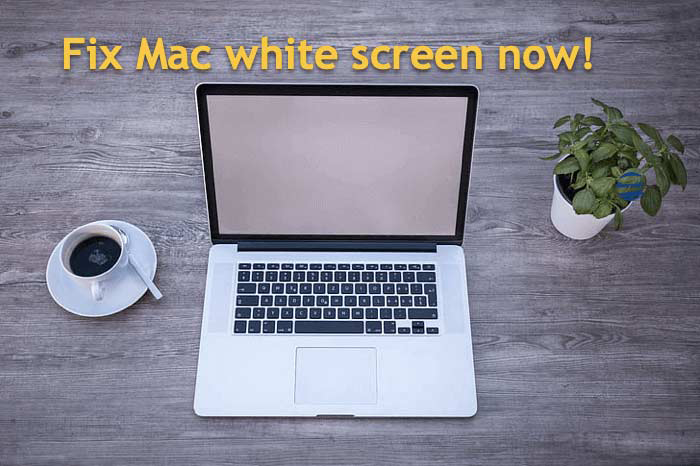 Retireve files from Mac that stuck on white screen

The white screen on your Mac prevents you from accessing all files on your Mac. Be caution! You are at risk of losing data. This video will tell you how to recover data from Mac that can't boot up. 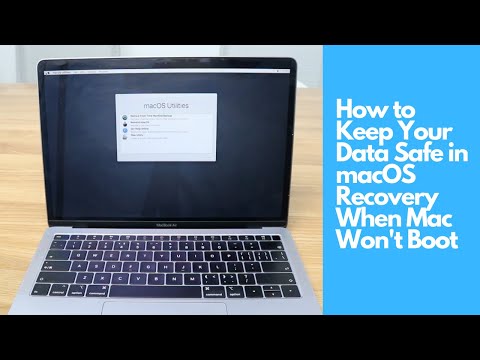 To recover data from your unbootable Mac, only data recovery software like iBoysoft Data Recovery for Mac can help you.

Have any trouble? Learn the details from How to run iBoysoft Data Recovery in macOS Recovery mode.

How to fix the Mac/MacBook white screen issue?

When Mac like MacBook Pro boots to white screen on startup, you can follow the following solutions to fix the problem.

This solution is easy but helpful in some cases. It's easier to isolate and identify what makes your Mac stuck on white screen.

You can remove hardware as much as you can. That includes RAM, external drives, type-C adapter, even your keyboard, and mouse. Later, you can reconnect one device each time and restart the Mac. If there is any hardware failure, you'll figure it out.

For the hardware inside your Mac, it's not easy to disconnect. But you can try the Apple Diagnostics or Apple Hardware Test (Mac introduced before June 2013) to have a check.

If the hardware is not responsible for this white screen problem on your Mac, you should move to check the software in Safe Mode. After all, the Mac computer not booting after the latest macOS update happens frequently.

Possibly, the system fails to deal with incompatible drivers after the macOS update. Or some applications fail to upgrade. Such software could result in a blank white screen on Mac.

First, you need to boot into Safe mode to check if it's a software issue:

For an M1 Mac, you should shut down your Mac. Then, press and hold the power button until seeing the startup disks and Options. Next, hold the Shift key. Finally, click Continue to enter into Safe Mode.

If you can boot your Mac into Safe Mode, it means that the white screen on Mac should be caused by a software issue. You can uninstall the recently insatlled software to fix this issue.

If it still not works, go on booting your Mac into Verbose mode to find out the specific troublemaker:

Reboot your Mac and immediately hold Command + V key combinations. You can see a live report when Mac is booting up. If the Mac stops at some point, you should see which program causes the problem in the report.

And last, to fix the Mac white screen problem, you can simply give the Mac a safe boot again. Then, remove the specific conflicting programs.

3. Reset SMC and NVRAM/PRAM of your Mac

SMC, short for System Management Controller, is a chip on the logic board of Intel-based Macs. It controls all power functions for your Mac like battery charging and sleep settings.

So, you can reset SMC by holding Control + Option + Shift keys when rebooting your Mac to fix the white screen issue of your Mac. For an M1 Mac, there's no SMC.

Hence, resetting the NVRAM/PRAM is another way to fix the Mac white screen issue. You should hold Command + Option + P + R keys at startup. But For an M1 Mac, NVRM is automatically running tests at startup and resets if needed.

Try this solution if you can see the Apple logo on the white screen (with or without the loading bar). The Apple logo means that the system finds the startup disk. However, for some reasons like file system corruption, the operating system directory can't be loaded.

You can boot into macOS Recovery mode and check and repair the startup disk with the First Aid feature in Disk Utility, then restart your Mac. If it works, the white screen of death on Mac will be fixed.

If First Aid reports the hard drive is about to fail, or it is not even showing up in Disk Utility, you have to replace this drive under the professional help. If the white screen is still there after reboot, it means that the disk errors can't be repaired.

As the corrupted Mac hard drive can't be repaired by First Aid, you need to reformat the startup disk and reinstall macOS. Reformatting will give a new file system so the drive can work again. However, it will also erase your all files from the startup disk.

So, check if you have backed up your Mac before. If no, to prevent unnecessary data loss, you need to recover data from Mac that won't turn on caused by white screen of death first. Then you can proceed with the following steps.

Then, things would be intuitive if you follow the on-screen instructions. After macOS reinstallation, you can restart the Mac and check if the Mac grey or white screen issue is missing.

6. Check the GPU of your Mac

Chances are that Mac stuck on a white screen at startup still. Sometimes, You can't even find anything abnormal after trying Apple Diagnostics. Then you should check the GPU (graphics processor) of your Mac manually.

However, discrete GPU is the default option for Macs with two switchable graphics cards. So, it's necessary to force your Mac to boot in integrated graphics. But you should not try this unless you are a specialist.

To disable the discrete GPU on boot:

You can end it up with a Mac restart. This should accelerate your display's performance. As a result, the Mac or MacBook Pro white screen issue should have gone with the wind. But at the same time, you'll lose some features like the ability to drive an external display from the Display Port.

To check if the GPU is incompatible with your Mac or broken physically, you can consult the Apple support and repair service.

What is the white screen of death on Mac?

Once a white screen shows on your Mac during startup, it means that your Mac has some issues. The issue could from hardware, software, firmware, or even the Mac models' design defect. But, it often occurs after a macOS update.

Besides, some of you may also see:

Once your M1 Mac, MacBook, or Mac starts or restarts into a white screen of death, any software, firmware, or hardware could be the reason. They are either corrupted or incompatible with your Mac. You should calm down and check them one by one to fix the problem.

At the same time, don't forget to recover data from your Mac with iBoysoft Data Recovery in macOS Recovery mode to another destination. Or, you'll face permanently data loss.