What is Firmware: Revive Firmware to Fix an Unresponsive Mac

Summary: This post describes the definition of firmware, as well as the differences between software and firmware. You will also learn how to update router & AirPods, and how to revive/restore firmware to fix a bricked Mac. 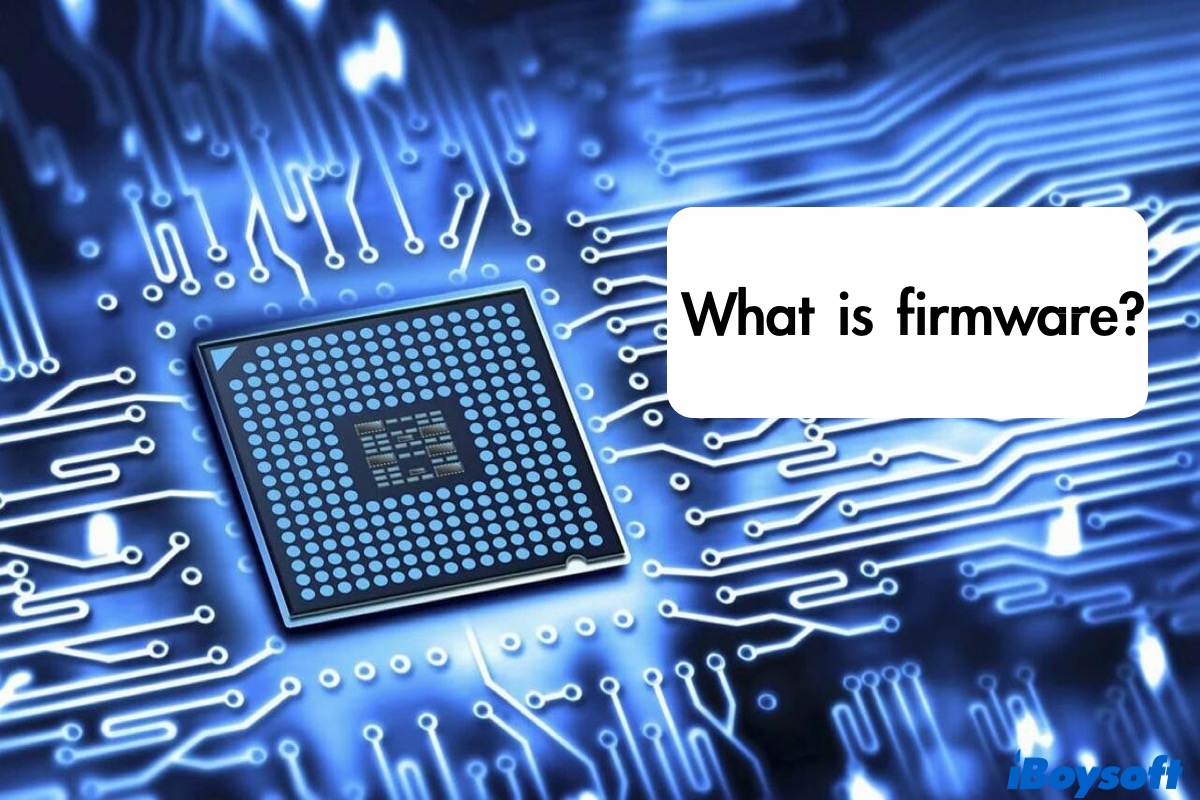 You may have heard of the term firmware many times in life. To you, It seems like some kind of software, but what it really is and what does it do?

Firmware can be found anywhere, in a computer, a USB flash drive, your phone, or even the traffic light. Reading what firmware is, the differences between firmware and software, and how it serves a computer can help you understand devices around you better.

Firmware is a kind of software embedded in hardware, providing low-level instructions for a device to communicate with other devices or perform some basic tasks. Without firmware, even the most basic device won’t function.

Like software, Firmware needs to be executed by a microprocessor or a microcontroller, but it is written to a piece of hardware device as opposed to software saved on a hard disk drive. It falls into somewhere between hardware and software and thus the name.

To avoid being deleted or tampered with, firmware was initially stored on ROM/ PROM, a non-volatile chip. However, firmware held by ROM/PROM can't be updated but replaced. So people switched to EPROM, and then the cheaper and easier to write and rewrite flash memory chips.

Firmware comes in various forms, depending on the hardware it resides. You can find it on personal computers, consumer products like iPods or mobile phones, automobiles, etc.

Here are some Firmware examples:

In Home Appliances and Personal-use Products:

In Routers and Firewalls:

What Function Does Firmware Serve in a Computer System?

Firmware on computers is used for storing all the basic codes for controlling your computer hardware, such as hard drives, keyboards, mice and monitors. When you press the power button, the CPU will start and fetch instructions stored on the firmware.

Then the firmware will start the monitor and keyboard and do some basic checks to ensure that the computer works properly. After that, it loads the operating system and transfers control to it. To conclude, firmware is essential for a computer to boot up.

Software relates to programs that are meant to be viewed, changed and interacted with users. Some examples are operating systems, word processors, databases, and other useful programs.

Software is designed to be updated more often and can be deleted without much consequence. It is often large and takes up substantial space on the hard disk.

Firmware is stored on a device to make it work. It's not meant to interact with users. Firmware changes infrequently and is smaller since it doesn't contain data needed for graphics and interface.

Unlike software, firmware loss or deletion often causes the device to lose function entirely. That's also why it's kept on components that are electrically isolated from other system parts.

Also, firmware is not designed to perform specific functions on the device, but the core tasks include instructing the computer's CPU when the operating system is not activated yet.

Updating firmware lets you explore new features with an enhanced experience and better security. Before updating, make sure the update is for your model to avoid risks of malfunction. Also, read the manual and pay attention to the warnings.

To upgrade your router firmware, you need to download the firmware update from the manufacturer > log into your router’s administrative console > find the section for Updating software > follow the onscreen instruction to finish the process. Lastly, reboot your router.

To update AirPods firmware on your iPhone, go to Settings > Bluetooth > i icon > About to check if you need a firmware update for iPods. If an update is available, you can download and install it manually after putting your AirPods into the case and charging the case. However, you are recommended not to do so but wait for it to be automatically updated.

When your T2 Mac or M1-based Mac fails to update or reinstall due to issues like power failure and won't boot normally or even into recoveryOS, you need to revive it by updating the firmware in the chip.

To revive the firmware, you need to download Apple Configurator 2 from the Apple store and install it on a working Mac running the same macOS as the unresponsive one.

The unresponsive Mac with the word "DFU" will appear in the device window of the working Mac. Select it and choose Actions > Advanced > Revive Device > Revive from the top menu bar. 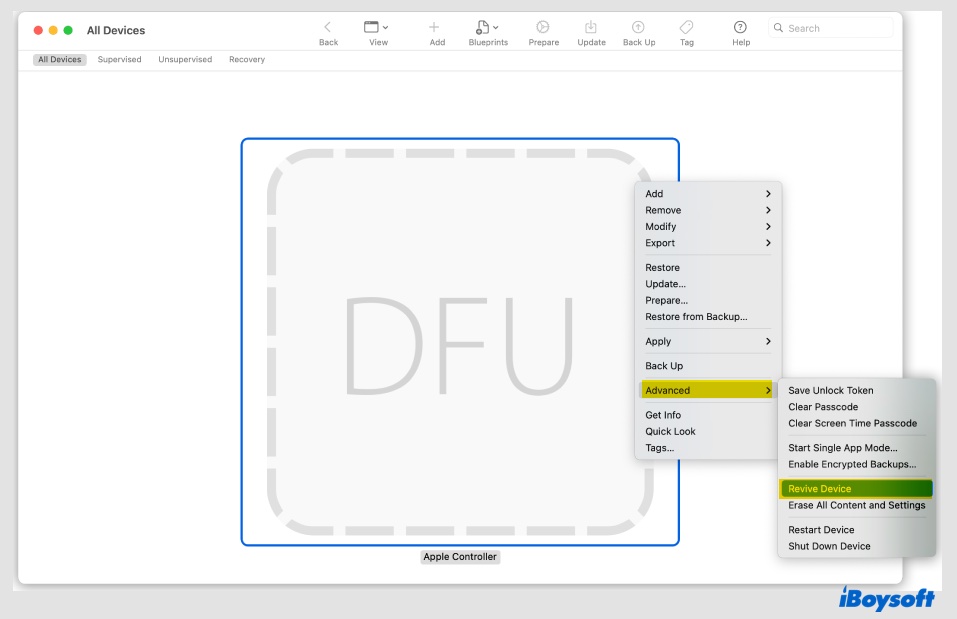 You will see an Apple log on the unresponsive Mac and Mac rebooting if the operation succeeds. Then you can boot into Recovery mode and reinstall macOS if necessary.

If you can't fix the bricked Mac through a revive, a restore will guarantee success but erase all data on your Mac hard drive and makes it unrecoverable.

To restore the firmware, follow the same steps above and choose Actions > Restore and click Restore. Then you can press Option + Shift + Command + R to reinstall the macOS that came with your Mac or the oldest available. You can update to the latest after the reinstallation.

Q1. Can firmware be deleted?
A

No. Deleting firmware will cause your device to stop working.

Q2. What two different types of firmware may be used on motherboards?
A

BIOS: used in computers with older motherboards; all text menu setup; slower booting up
UEFI: replaced BIOS, used in most modern computers.
BTW, to use the GPT partitioning system on a hard drive, UEFI is required.

Having a login password doesn't protect your Mac from hackers who can boot into Recovery mode and reset your password. A Mac firmware password prevents this situation from happening by adding a hardware-level layer of security to your Mac.

Q4. What do today's computers use to access the bios firmware interface?
A

Modern computers use GPT to access the firmware interface.