Summary: This post explains Why (M1) Mac keeps crashing and solutions to troubleshoot different Mac crashing scenarios, such as Mac crashing on startup or Mac crashing every few minutes, etc. 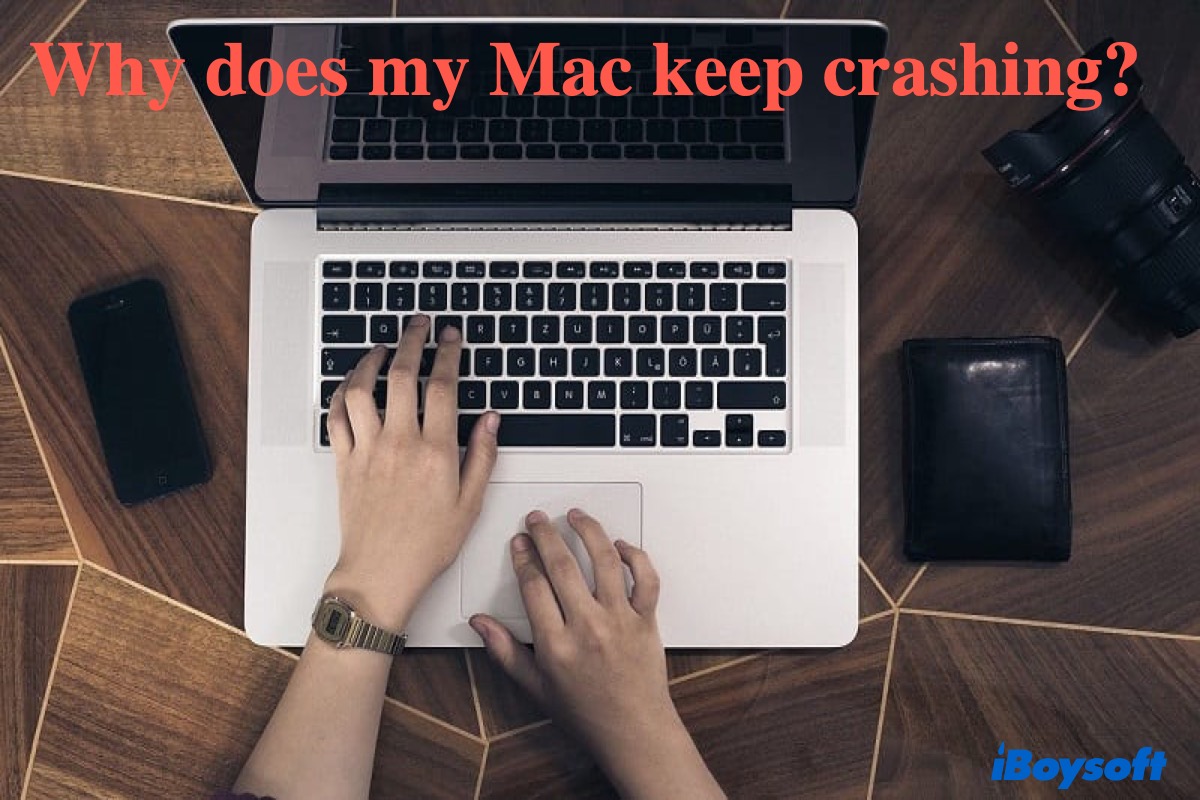 It's annoying to see your Mac crashing while running apps; what's even worse is Mac crashing every few minutes. Some notice their Macs crashing after updating to macOS Monterey/Big Sur, but many others report that their MacBook Pro crashes randomly.

As it turns out, the crashing isn't an Intel-Mac thing, and increased M1 Mac crashing cases are emerging. In some cases, the crashing is accompanied by a cracking sound or three short beeps, but others may also experience:

This post will explain why your Mac keeps crashing and feasible solutions to solve it.

Why does my Mac keep crashing?

If your Mac crashed and restarted, you would likely receive a message reading, "Your computer was restarted because of a problem." Usually, Mac freezes before crashing due to not being capable of dealing with installed software or connected devices. And the restart is its effort to cope with the frozen Mac.

Here are the most likely reasons why your Mac keeps crashing:

Insufficient system memory or storage (Memory vs. Storage on Mac)

Your Mac may freeze or crash when it doesn't have enough memory or storage to serve open apps, especially for resource-consuming software like Photoshop.

Can you recall what software you were using before MacBook Pro crashed? Likely, it's a game, a graphic editor, or similar apps such as Adobe Flash and Java that demands a lot from your CPU. You may also notice Mac's fans making a louder noise than usual, particularly when running several such applications simultaneously.

Many users may find Mac crashing or crashing more often after updating to macOS Monterey. That's because the new OS is incompatible with some old apps that no longer meet system requirements. Thus when these applications can't respond to a request, they will freeze, sometimes causing Mac to crash.

Adding new hardware or replacing a part of Mac will also potentially cause Mac to crash if improperly done. A good place to get the crash details is to review the Mac crash reports accessible from Finder > Applications > Utilities > Console > Crash Reports. Alternatively, if you have received the "Your computer was restarted because of a problem" message, click Report to view the details. 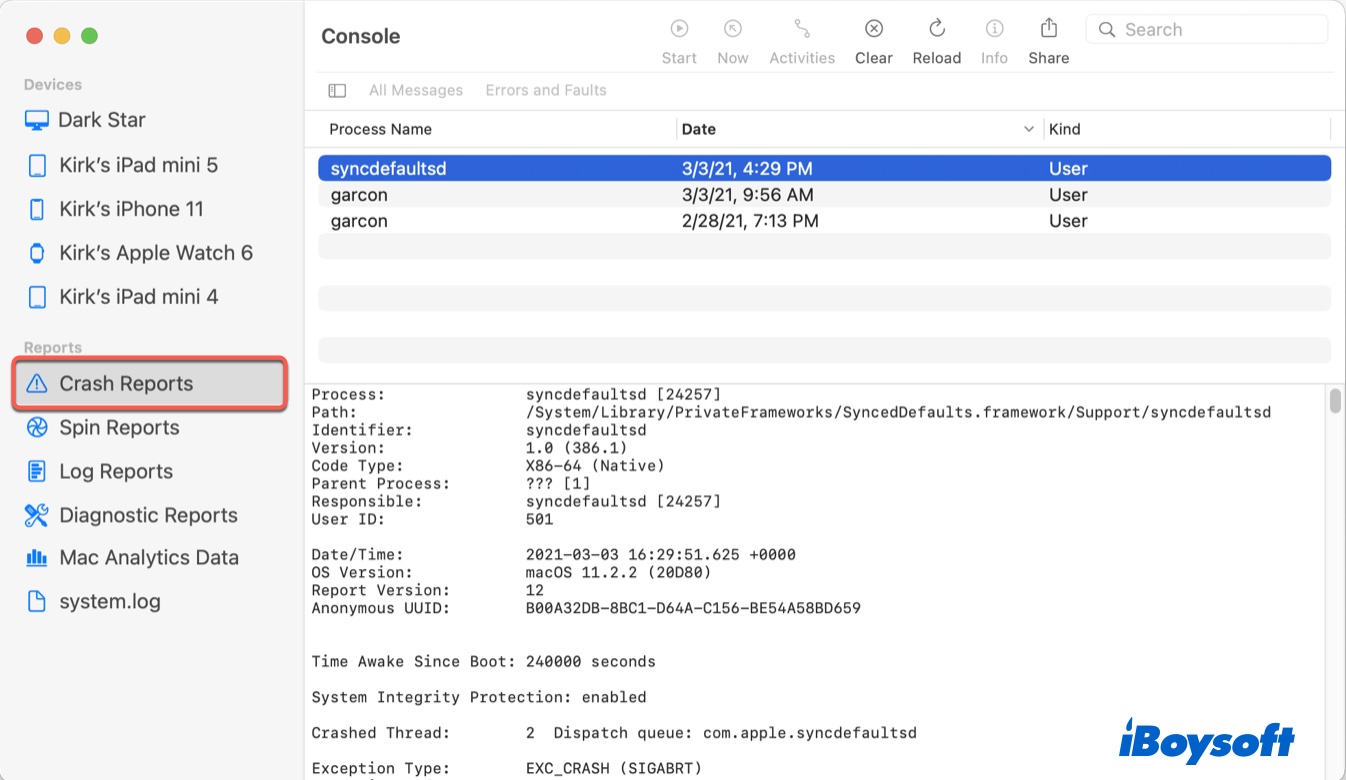 You can also check the disk SMART status of your hard drive to see if your Mac SMART status reads Failing, which also causes your Mac crashing too.

If you find the information useful, please share it by clicking the button below.

What to do when Mac keeps crashing?

If Mac keeps crashing while using a specific app like Mono framework or AVG, consider uninstalling it or going to the app developer to check if it's incompatible with the current OS.

Sometimes, the crashing is a result of having too many applications running at the same time, or a resource-intensive app burdens the Mac. If that's your case, you should free up disk space on Macintosh HD or switch to an alternative requiring fewer resources.

If you recently had your RAM or hard drive replaced, the Mac crashing issue may happen when the hardware is incompatible or incorrectly installed. Then what you should do is to ask for help from a technician.

Besides, consider recovering data from the crashed Mac beforehand to avoid potential data loss while fixing the problem. Now, let's follow the steps below to troubleshoot the "MacBook Air keeps crashing" issue.

What to do when Mac keeps crashing?

It may occur to you that MacBook crashes randomly when it's really the wrongdoing of one or more incompatible or corrupted peripheral devices. Since NVRAM stores peripheral data, chances are, you can fix the crashing Mac by resetting NVRAM. Here is how to do it:

When Mac boots up, use it as you were before to see whether the crashing still exists. Also, if you are using any new or possibly broken peripherals, stop using them for a while to test if MacBook keeps crashing. If that doesn't do the trick, try to reset the System Management controller.

SMC controls power-related functions on Mac, thus you can reset SMC if Mac shuts down unexpectedly. Note that the way to reset the SMC differs from notebooks and desktop computers, and Macs with or without T2 chips. Here is how to reset SMC on Mac notebooks that have no T2 chips:

If the Mac crashing issue persists, you can boot into Safe Mode to troubleshoot the problem.

Safe Mode is a common way to test whether it's software that loads while Mac boots up causing constant crashes or Mac crashing on login. It achieves this first by preventing software such as login items, third-party fonts, and unnecessary system extensions from launching during the boot process. It then runs First Aid to check your Mac's startup disk and deletes inessential system caches.

If Mac doesn't crash in Safe Mode, you should restart your Mac normally to test for the problem again. Suppose the issue returns after a normal boot; then we know a startup item is the culprit. You can remove all the login items, re-add them one by one, and restart Mac after adding one to narrow down the possibility.

If Mac keeps crashing in Safe Mode, it's necessary to verify the startup disk in Disk Utility to see if it's corrupted.

The "MacBook keeps crashing" problem should be fixed by now; if not, there could be damages to the RAM and logic board due to overheating or other hardware-relevant issues.

Apple Diagnostics is a basic mode that helps people figure out which hardware part is rendering your Mac crashing frequently.

When it shows you the detected issues and solutions, you can follow the instructions to fix them. Then reboot normally and repeat actions to see whether MacBook Pro keeps crashing. If that doesn't work, the constantly crashed Mac may be associated with unknown system bugs.

If your Mac hasn't been updated for a while, think about updating it to the latest available version. By updating the operating system, you are also updating the firmware and security patches to the glitches that may result in the Mac crashing issue. You can do this by going to the Apple menu > About this Mac > Software Update.

If your MacBook Pro keeps crashing after the update or starts constantly crashing right after upgrading to macOS Monterey or Big Sur, reinstalling macOS is the fix.

Reinstalling macOS is proved to be an effective solution to different types of Mac crashing scenarios, including Mac crashing on startup (after the Apple logo appears, while you were typing the password, or after the home screen appears).

Although reinstalling macOS won't erase data on the drive (Macintosh HD - Data), it's best to backup your Mac with Time Machine or recover data from the crashed Mac using iBoysoft Data Recovery.

Hopefully, you won't face any crashing afterward. But if it still exists, you can downgrade macOS to a version where Mac crashing issues seldom happen. Or, if Mac keeps crashing while browsing a website, clearing browser caches is also recommended.

Q1. Why my Mac keeps shutting down?
A

Your Mac will most likely shut down when the battery runs low. Besides, when Mac overheats, it will shut itself down to prevent damaging the internal components. The shutdown could also relate to errors in the software.

Q2. Why does my Mac keep crashing and restarting?
A

The most common reason rendering your Mac crashing and restarting is kernel panic, which occurs when Mac's kernel or macOS detects a problem that can be solved by restarting your Mac. Other reasons include missed macOS updates and incompatible peripheral devices.