How to Recover Lost Data from T2-Secured MacBook Pro/Air?

iBoysoft Data Recovery for Mac, an Apple signed and approved software, can help you recover data from an T2-equipped Mac like MacBook Pro/Air in a secure and stable way.

Summary: This page is about how to recover data from MacBook Air and MacBook Pro 2018, 2019, and later that has a T2 security chip. T2 chip data recovery when MacBook won't turn on is possible now.

Although Mac notebooks have gained a reputation for their performance and beauty, more and more people find a drawback in MacBook Pro and MacBook Air introduced in 2018 and later. That is, when a MacBook with T2 chip won't turn on after water damage or system crash, data recovery is nearly impossible.

In this article, you will get three ways to recover lost data from a T2-secured Mac.

To get this whole issue straight, the necessary part to know is how the T2 chip makes differences, and what are them.

What does the T2 chip do?

Apple's T2 security chip is a custom silicon for Mac, building on its predecessor, the T1 chip. The second generation is redesigned for delivering more new capabilities as the following.

Like the A-series chips in iOS devices, T2 Chip is for a new level of integration and security to Mac. Now that having a T2 chip in the Mac brings so many new and good features, what Macs have T2 chips inside then? In the eagerness to know if your Mac has Apple's T2 chip, check the following part.

What Macs models have the T2 security chip?

Apple's T2 security chip made its way early from the iMac Pro 2017. Since then, those Mac models come with this powerful chip.

In the case of having no idea which model the Mac is, System Information is a good way to check out. Simply go to the Apple menu > About this Mac > System Report > select either Controller or iBridge, an "Apple T2 chip" phrase on the right means the Mac is furnished with the T2 chip.

It's acknowledged that Apple's T2 chip makes data on the internal SSD more secure. But the T2 chip storage encryption also make it almost impossible to recover data from a damaged Mac. After failure on limited password trying, the SSD will be locked and won't accept any password. And any attempt to remove the SSD from the machine will make the drive unreadable.

Moreover, every Mac with T2 chip has a unique ID for encryption. So, it's impossible to access data in one internal SSD on another Mac. As a result, when MacBook Pro or MacBook Air that has a T2 chip is not turnning on, traditional ways of data recovery like Target Disk Mode won't work anymore.

But does that mean MacBook Pro 2018 data recovery is impossible forever? Not necessarily.

How to recover lost data from T2-secured Mac?

Up to now, there are three ways to get files off Macs that introduced in 2018 and later. One of them is the T2 chip data recovery, which is available from iBoysoft even if the Mac with T2 chip won't turn on.

Let's check them one by one.

Time Machine is a built-in backup tool on Mac computers. So, if you have enabled Time Machine backup before files get deleted or lost, you can restore data from Time Machine automatic backups.

• How to recover lost data from Mac with Time Machine backup?

Time Machine is a good tool to recover deleted files from MacBook Pro SSD. However, this method works only if you have set up Time Machine on MacBook Pro 2018/2019 before files are lost. In the case that you didn't make a backup, the next solution is a better choice.

In terms of data recovery from MacBook 2018 and later, no Mac data recovery tool can deal with the T2 chip, except for iBoysoft Mac Data Recovery. 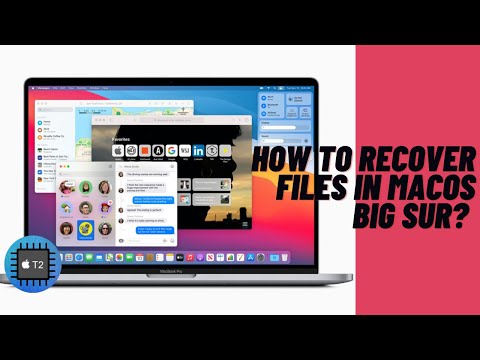 Note: Before you follow the steps below, you have to make sure your Mac has an Internet connection.

Note: If you can't find the partition that you want, you can choose the Find Lost APFS Partitions tab at the top right. It can find the lost partitions to get files off. A correct password is required when it prompts you to fill in.

There are some situations that Mac Data Recovery software can't help to rescue files. For example, The logical board of a MacBook Pro 2019 is nonfunctional partially. Or the Mac shows a black screen after physical damage. Then, you need to contact the Apple support for data recovery from a soldered SSD in MacBook. Apple store is the last hope if you want to recover data from a dead or water damaged MacBook that has a T2 chip.

How to disable secure boot on T2-secured Macs?

By default, the secure boot feature of the T2 chip is turning on for only loading a legitimate and trusted operating system at startup. This is good in ensuring Mac is in a known trustworthy state when it's booted. But it will be a problem if you want to boot from an external drive after a catastrophic internal disk failure.

So, you might be in need of disabling this secure boot. Whether you want to have Linux on the T2-secured Macs, or you just want to hedge your bets to fix issues when internal SSD is not able to boot up, you can disable the secure boot.

Of course, You win some, you lose some. After the T2 Security Chip is no longer verifying the system integrity, you might lose the Touch ID authentication for Apple Pay.

Last but not least, back up!

All methods of Mac T2 chip data recovery introduced in this post are based on one thing. That is the Mac machine can be powered on, or else, data recovery from Mac with a T2 chip is impossible. To prevent data loss when Mac is completely dead for physical or liquid damage, the best MacBook data recovery solution is to back up, back up, and back up!