Rosetta 2 Introduction: What Is Rosetta 2 And How to Install It on M1 Mac

Rosetta 2 Introduction: What Is Rosetta 2 And How to Install It on M1 Mac

Summary: This post is an overview of Rosetta 2 on Mac. It tells what is Rosetta 2 and how to download and install Rosetta 2 on M1 Mac. It also helps you to check which apps need Rosetta to run on Apple Silicon Mac. 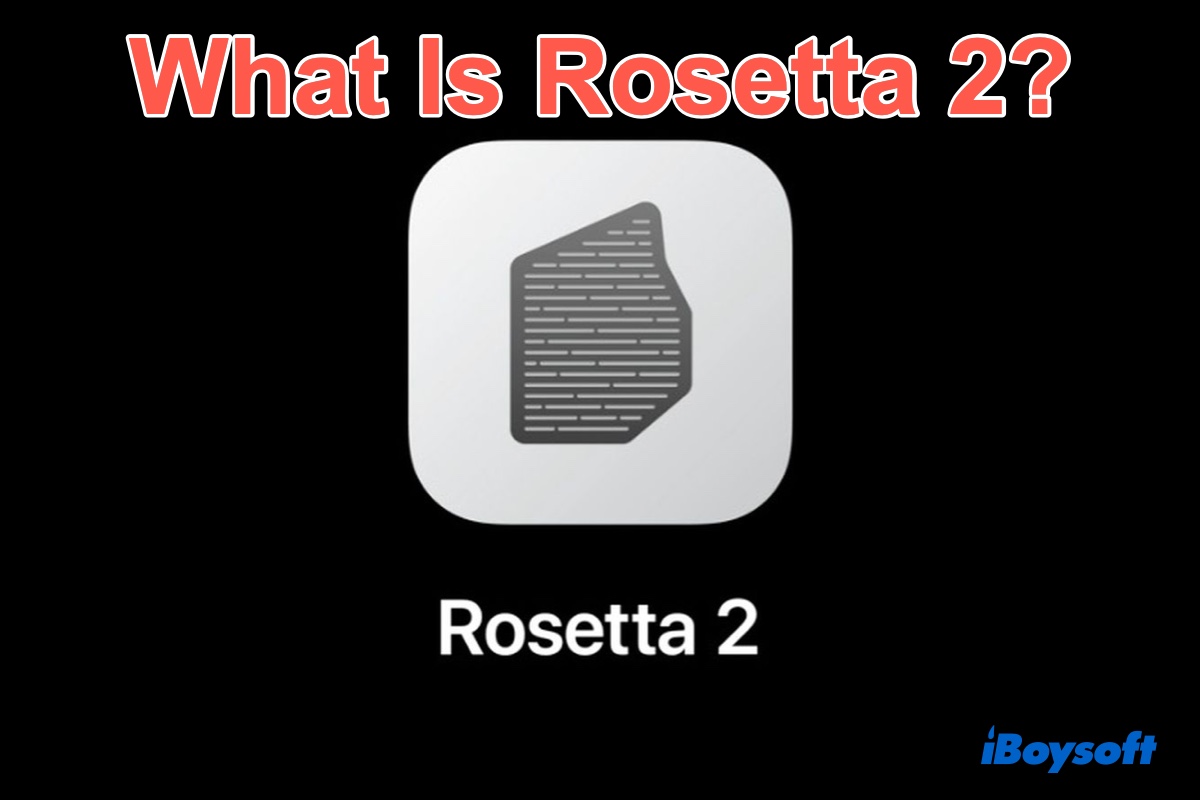 In 2020, Rosetta 2 was introduced as a component of macOS Big Sur and is part of the Mac transition from Intel processors to Apple Silicon. This is breaking news for most Mac users. Some of them may be surprised by the Apple Silicon chip while others may be curious about Rosetta 2 on Mac.

If you're one of the users who are interested in Apple Rosetta 2, then this is an article you shouldn't miss. It unveils what is Rosetta 2 on M1 Mac and how to download and install Rosetta 2 to use Intel apps on M1 Mac seamlessly.

Rosetta 2, an emulator designed by Apple Inc. for macOS, is used to translate Intel-based Mac apps so they can run on Apple Silicon Macs without having to modify the source code. More specifically, it translates x86_64 processor instructions (aka 64-bit Intel) for ARM-based Apple Silicon.

The first version of Rosetta was released in 2006 in Mac OS X Tiger, which remarked the Mac transition from PowerPC processors to Intel processors, allowing PowerPC software to work on Intel-based Macs.

Once Rosetta is installed, it runs automatically in the background of macOS and begins the translation process when needed. When translation finishes, the operating system launches the translated software in place of the original.

Therefore, Rosetta is almost transparent for average Mac users. You won't even notice much difference in the performance of an app using Rosetta compared to one built to work natively with Arm-based Macs.

How to install Rosetta 2 on M1 Mac?

Rosetta 2 isn't included within a standard macOS installation and has to be installed separately. But you don't have to go searching for it on the web to download Rosetta 2, because macOS will ask you if you want to install it the first time you attempt to launch an Intel-compatible app on a Mac with an M1, M1 Pro, or M1 Max chip. 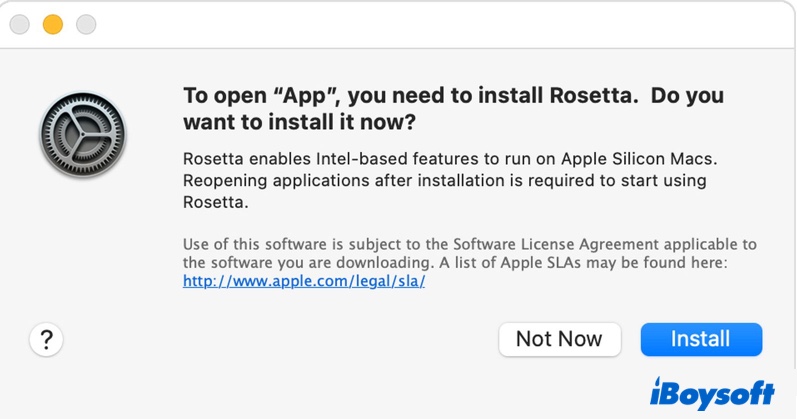 To install Rosetta 2 on an Apple Silicon Mac, simply click the Install button when the dialog prompt appears on the screen. Enter your username and admin password to allow the Rosetta 2 installation to proceed, and once the installation is complete, Rosetta will be available for any of your apps that need it.

The translation process works the first time the app is opened and may run a little more slowly than normal, but you won't experience the same delay the next time you run the software. 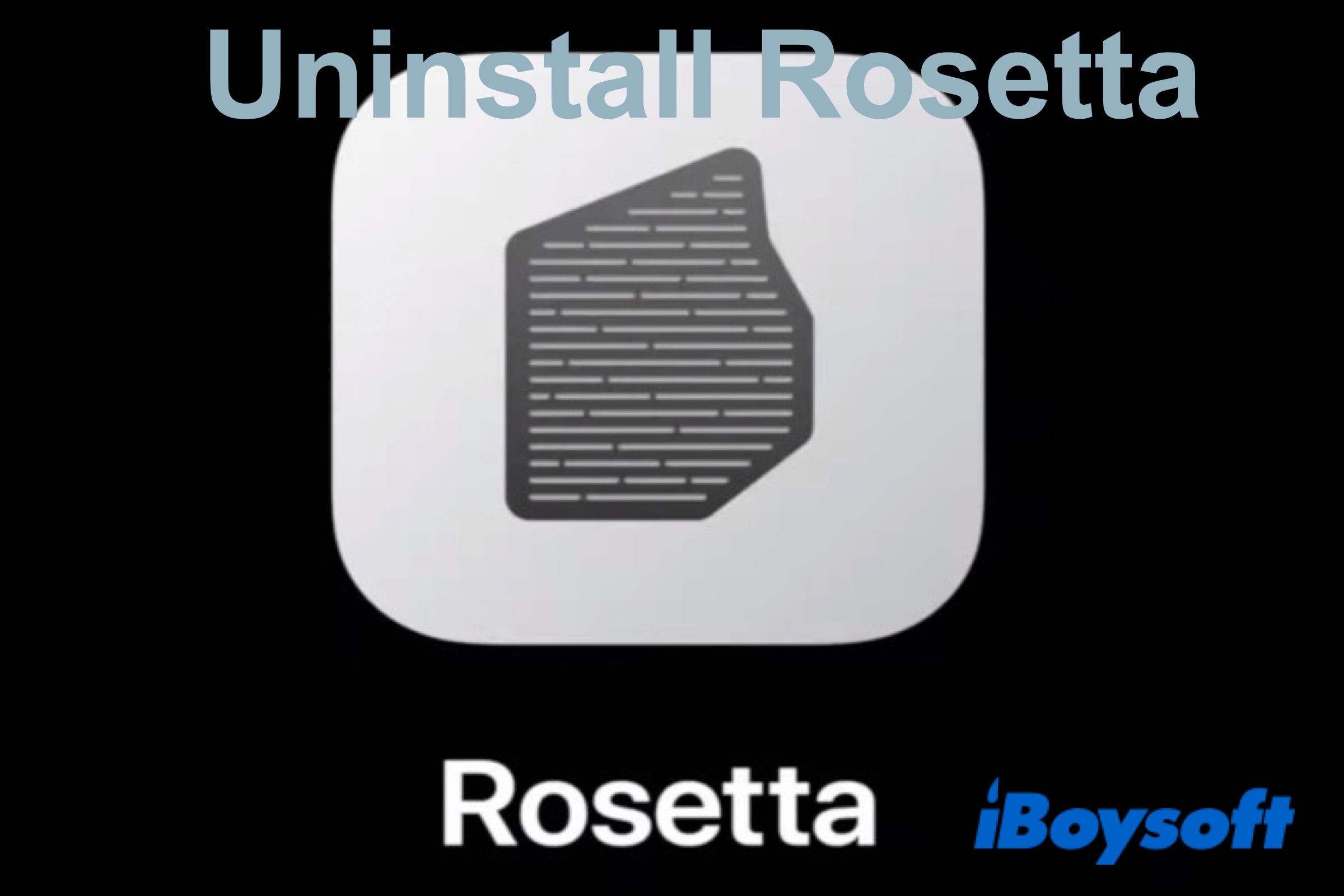 (Step-by-Step) How to Uninstall Rosetta 2 from an M1 Mac?

This post will guide you to uninstall Rosetta 2 step by step and tell you how to check if Rosetta 2 is installed on your M1 Mac. Read more >>

To check apps that need Rosetta or can use Rosetta, you can use Mac Finder Get Info tool to help you. Here's how to do it:

Normally, Universal apps don't need Rosetta. But if a universal app doesn't recognize an add-on that you installed for the app, you can quit the app, select Open using Rosetta in the Get Info window and try it again. This setting allows a universal app to use plug-ins, extensions, or other add-ons that haven't been updated to support Apple Silicon.

Apple Metal Overview: What It Is Used for?

Xcode for Mac Overview: What Is Xcode on Mac and Do You Need It

But at least for now, it doesn't seem that Apple has disabled Rosetta 2 in any regions, and there is still no evidence of when, or if, the company will actually do so. The message may have been added merely as a precaution in case the company faces any related restrictions in the future.

Rosetta is perfectly safe for your Mac and is made by Apple. So you should have no security concerns about it.