How to Force Shut Down Mac with Keyboard? 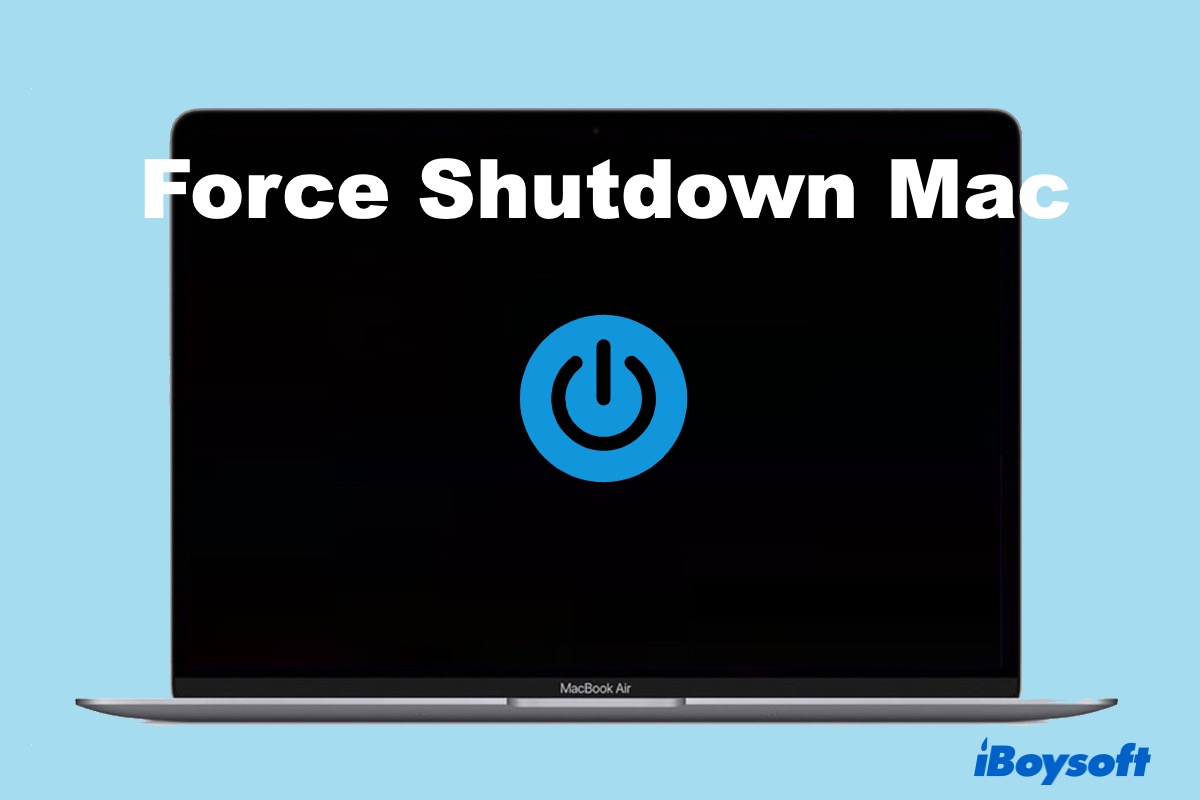 Are you dealing with an unresponsive Mac? Likely, you also experience the cursor not moving or turning into a spinning ball, the mouse not working, and fans making louder noises than usual on Mac. In which case, a standard Mac shutdown by clicking the Apple logo in the top-left corner > select Shut Down will be out of the question.

A force shutdown is often considered an alternative when Mac won't shut down and the last resort to fixing the frozen Mac. But many are still concerned that forcibly shutting down Mac will cause unexpected damages. This post will give you the answer and show you how to force shut down Mac with keyboard combos or without the power button.

A force shutdown, also referred to as a hard reset/shutdown, does not impact your Mac's hardware. Especially when all modern Macs are configured with Solid-state drives (SSD), the chances of being broken are even smaller.

However, forcing your Mac to shut down will cause you to lose unsaved files or progress in open applications and may potentially corrupt system files if done repeatedly.

If this is the first time your Mac got stuck, or it doesn't occur often, a forced shutdown will hardly bring any damage to your Mac file system because advanced file systems such as APFS or HFS+ features crash protection.

In fact, many applications like Microsoft Word also power their users with a backup of the unsaved work that you can restore when reopening the app.

How will macOS react after a force shutdown?

After experiencing a forced shutdown, macOS will run a file system check to fix potential errors the next time you turn on your Mac. That's also why starting up after forcing Mac to shut down takes longer.

If you have the suspicion that your Mac hard disk may have problems after a force shutdown or in general, you can run First Aid in Disk Utility to make a diagnosis.

What to do before a force shutdown on Mac?

Use the tips below to lower the possibility of losing data before forcing your Mac to shut down:

1. Save files or projects you are currently working on.

You can press the Command + S keystroke to save open files or take a photo of the progress in case the keyboard combination doesn't work.

To avoid causing damage to the data on your external storage, you can safely eject them by dragging the drive icon on your desktop to Trash or clicking the Eject button next to your drive name in Finder.

Before heading to a Mac force shutdown, it may be better to force quit unresponsive apps on Mac first because that could be the culprit making your Mac frozen.

How to force shut down Mac?

If you cannot interact with any on-screen activities, you need to perform a Mac force shutdown or a Mac force restart.

How to force shut down MacBook Pro/MacBook Air?

Here are the ways to force shut down a Mac that's not responding:

1. Press and hold the power button until the screen turns black.

3. To force your Mac to turn off without the power button, you can discharge your Mac to drain the battery until it turns off. (least recommended)

Q1. Why is my Mac not responding?
A

Mac not responding is often caused by misbehaved software, too many resource-hungry applications running at the same time, or hardware issues in an aging computer.

Q2. What does force shutdown mean on Mac?
A

Unlike a graceful shutdown, a force shutdown on Mac kills all ongoing processes without saving unsaved changes.

Q3. How to restart MacBook Pro?
A

The simplest way to restart a MacBook Pro is by clicking the Apple icon at the top-left of your screen and choosing Restart. Another method is to press and hold the keyboard combination: Control + Command + Power.