How to Prevent Excessive SSD Wear of Your M1 Mac

Summary: Apple Silicon M1 chip greatly enhances the performance on the latest Macs but shows excessive SSD wear and usage. This article discusses the issue in detail and provides techniques to help you prevent your SSD from excessive usage. 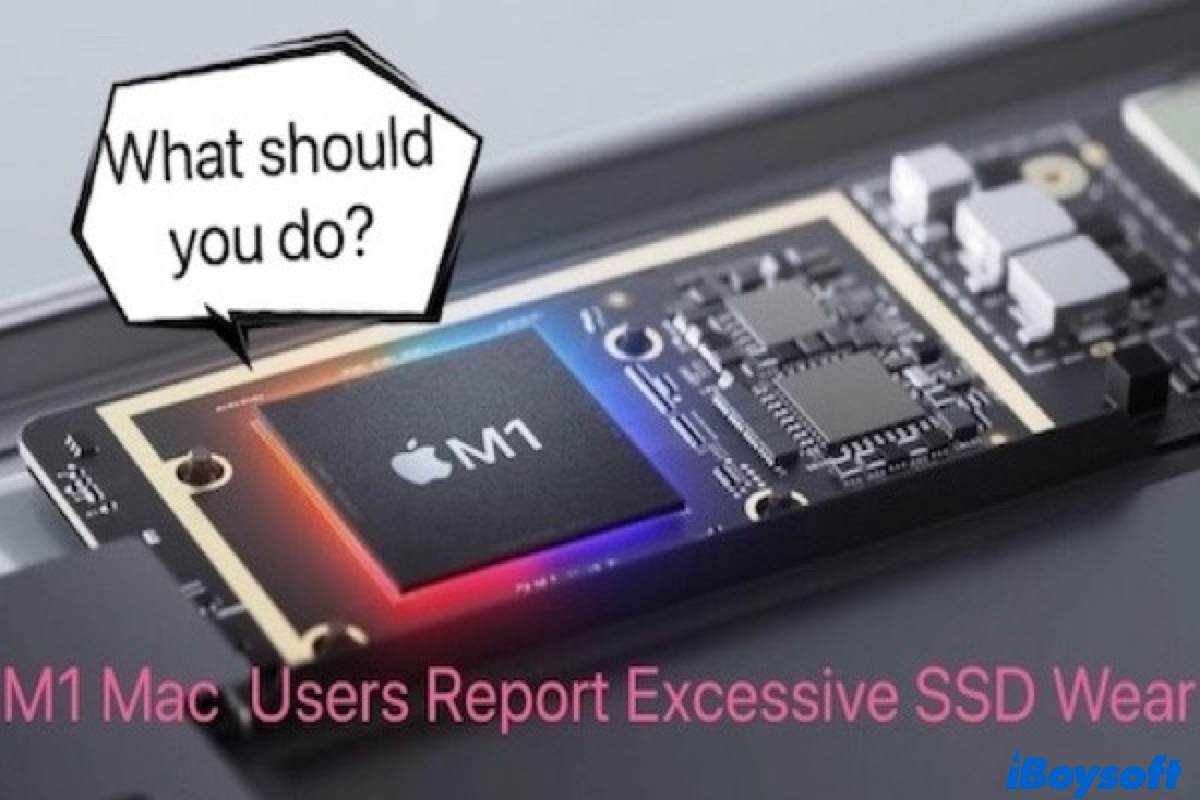 As the M1 chip's enhanced designs like a unified memory architecture and an 8-core CPU, users take it for granted that their Apple silicon Macs would be more durable and have a longer lifespan.

However, some M1 Mac users have tested and reported that M1 Mac has shown an excessive SSD wear and usage issue. In other words, the internal SSD of the M1 Mac has undergone high writes over a short time (over the past few months since M1 Macs were delivered). 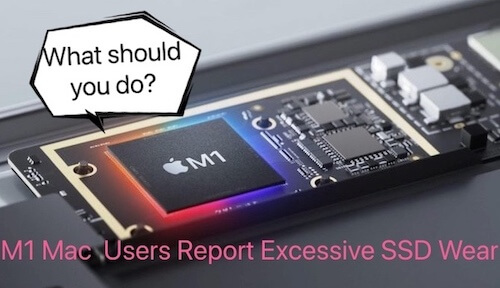 It is said that the most terrible case is an M1 Mac user's internal SSD that has used 13% of its total TBW (total bytes written) value. The wear speed of the SSD on the M1 Mac has surpassed that of on some Intel-based Macs.

Consequently, the lifespan of the SSD is inevitably shortened. And the SSD is soldered to the logic board in your M1 Mac. So, once the SSD drains, your M1 Mac will also stop working. Then, your M1 Mac becomes a brick, and you have to purchase a new one.

You may wonder how did these M1 Mac users draw such a conclusion? Are their reports believable? Please go on reading.

Some M1 Mac users have questioned the SSD's excessive wear. Hector Martin mentioned on his Twitter that he has only used his M1 MacBook Pro (with 2TB storage of SSD and 16GB of RAM) for about 2 months, but it has registered 3% total usage of the SSD.

And he speculated that if the Mac only has 256GB storage of SSD, the total usage of the SSD would be equal to about 30%. Based on this rate, some M1 Macs will only work for about half a year. 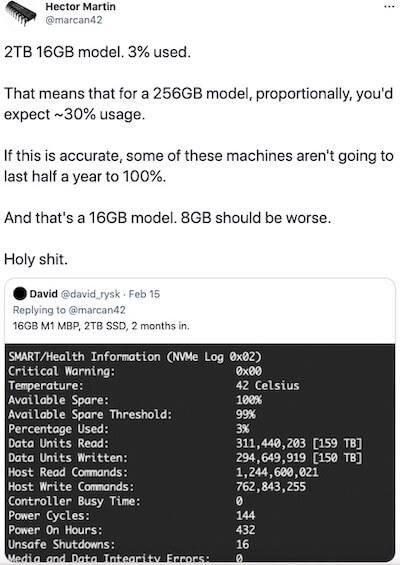 It sounds horrible. Apart from Martin, Dan Moren also put an image on his Twitter. He compares the SSD usage of his 2017 iMac to that of an M1 MacBook Air purchased last fall. His data analyses are another verification. 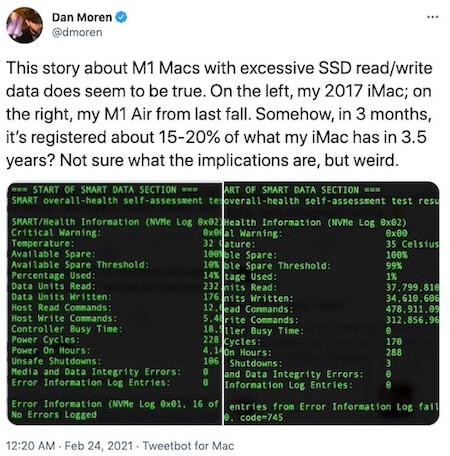 Check if your M1 Mac has the excessive SSD wear issue

You may be curious about how much your total usage of the internal SSD is and want to have a check.

To check the health of your M1 Mac's internal SSD, firstly, you need to install Xcode (An Apple app for developers) free from the App store. Then, install a package manager (a set of tools for performing tasks like installation) like Homebrew. Finally, download Smartmontools and install and run it through some command lines.

To install Smartmontools, type the command below into the Terminal and press Return:brew install smartmontools && sudo smartctl --all /dev/disk0

If you see "zsh: command not found: brew", re-type:nano ~/.zshrc

If not, you will directly be asked to enter your password. Press Return and get the information about your SSD.

The way to install and use Smartmontools is complicated, you'd better ask a friend of experience to help you.

A Trick to prevent excessive SSD usage of your M1 Mac

Whether your M1 Mac has an excessive SSD usage issue or not, here's a trick for you to prevent this issue from happening or becoming worse - to disable TRIM.

SSD TRIM, a system-level command, only can be enabled or disabled with Terminal. It allows the macOS to timely inform the internal SSD which blocks of data won't be used anymore and can be erased to make room for the upcoming data.

And the process of writing to an SSD is erasing the existing data from the flash memory cells first, and then programming new data onto them, hence, if TRIM is enabled, there's no need to erase the existing data before writing data to the SSD. Consequently, the write speed of the M1 Mac will become faster.

However, the faster the write speed of the SSD, the more likely the SSD is to be excessively used. Then, its lifespan of it will become shorter.

Typically, TRIM comes with a Mac with SSD and is automatically turned on. If you want to disable it, you should type the following command in Terminal.sudo trimforce disable

And then press Return. Usually, there's a requirement for your admin password. Then, you'll see a notice, be sure to read it carefully. If you want to go on, press Y.

As mentioned above, TRIM will make your SSD work more efficiently and has a quick write speed. To disable TRIM, your M1 Mac may slow down.

Inevitably, you lost some important files sometimes but without a backup. At this time, you can try some data recovery software to help you restore the lost data.

iBoysoft Mac Data Recovery is highly recommended. It can help you recover your lost documents, files, videos, and other types of data from the corrupted or unbootable Mac.

Note that iBoysoft Data Recovery for Mac will support the internal hard drive of the M1 Mac soon.

How to prolong your SSD's lifespan?

As we know, the more you use your M1 Mac, the more possible its SSD will get excessive wear. But it doesn't mean that you should put aside your M1 Mac and use it as little as possible.

You should find some ways to extend the lifespan of your SSD. Follow these tips may have some help:

Although the M1 Mac users report the excessive SSD wear issue, backing up your M1 Mac and preparing the data recovery software in advance can reduce the loss it brings. By the way, change the way you use your M1 Mac, which can help you prolong the lifespan of the SSD.