How to Install Homebrew on Mac in 2022 [Complete Guide]

How to Install Homebrew on Mac: A Comprehensive Guide

Summary: Homebrew is a free macOS package manager that allows you to install some open source software on your Mac. In this article, you'll learn how to install Homebrew on Mac and uninstall it by running commands in the Terminal. 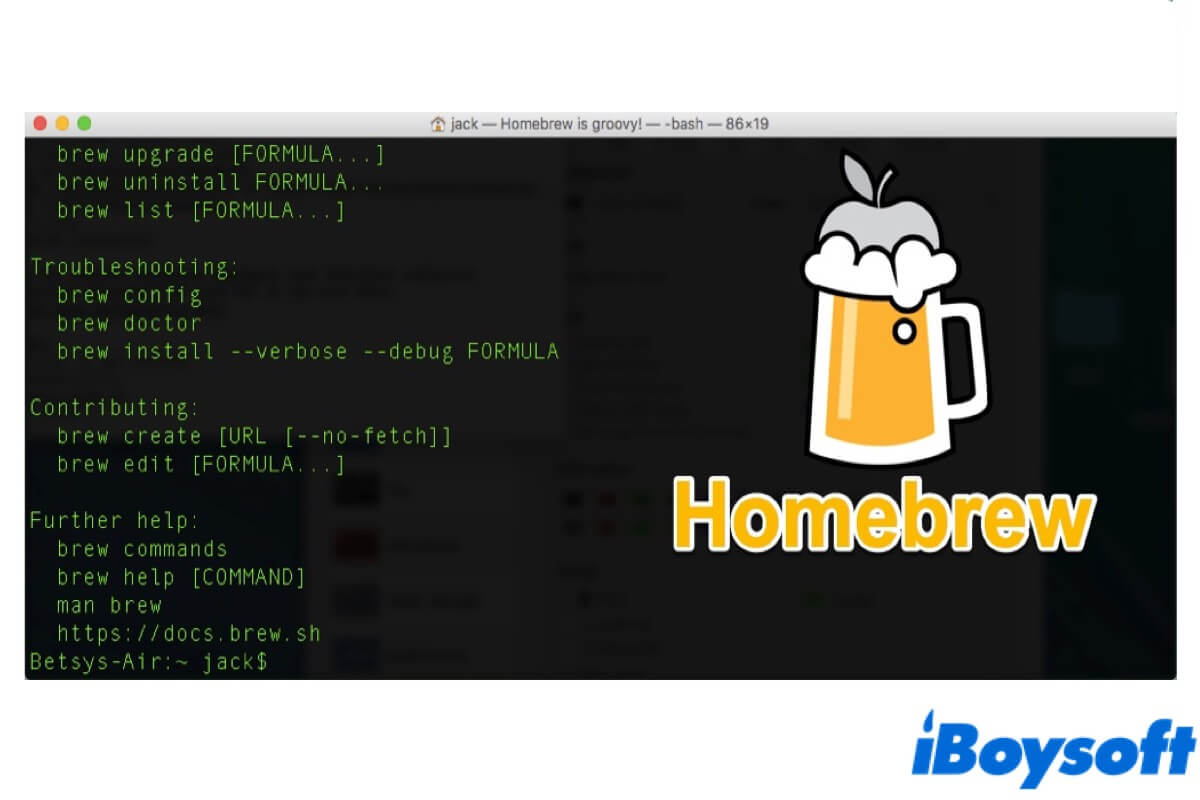 Speaking of Homebrew, some of you might not be familiar with it. By putting it simply, Homebrew is a package manager for developers, sysadmins, and power users on macOS. This tool is a little bit tricky because it works based on command lines.

But don't worry, with the step-by-step instruction in this article, we will show you how to install Homebrew on Mac. Thus, you can free download and use some open-source software or applications as developers do. Read on for more!

Homebrew is a free and open-source package manager for macOS, which lets you install, update, and manage tons of command-line-based tools like Python, Ruby, and Node.js using Mac Terminal. "Homebrew installs the stuff you need that Apple didn't", this is how Homebrew creators describe it.

Requirements for installing Homebrew on Mac

Before installing Homebrew on Mac, please make sure your Mac meets the following requirements, otherwise, you may fail to install it on your device.

If your Mac meets the requirements of installing Homebrew, move on to the next part!

How to install Homebrew on Mac?

After knowing what is Homebrew and its prerequisites, it's time to dive into how to install Homebrew on Mac. Since installing Homebrew on Mac needs to be done with several command lines in Terminal, please follow the instructions step by step! Without further ado, let's get started!

As we mentioned before, installing Homebrew on Mac needs command line tools for Xcode. For those who are not familiar with Xcode, it is Apple's native integrated development environment, which contains all the tools for software development on Mac, and with it, Homebrew can function properly. Follow these steps to install Xcode:

Install Homebrew on your Mac

After installing Xcode, your Mac is ready for Homebrew now. Here's how to install Homebrew on Mac:

For Intel-based Mac, the whole installation is completed now. If you are using an Apple Silicon Mac, there's one more step.

Different from Intel-based Macs, Homebrew files are installed into the /opt/homebrew folder on Apple Silicon Macs. So, if you followed the above instructions to install Homebrew on your Mac, after the installation is complete, you'll see a message below. 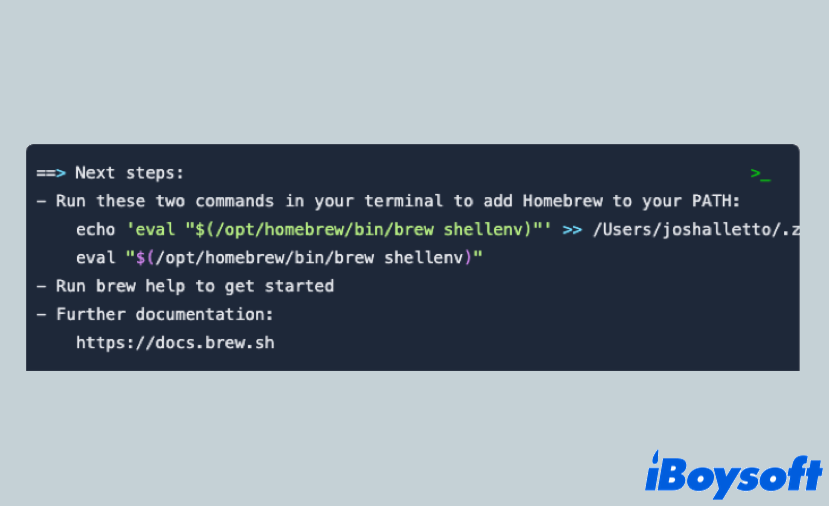 On Intel Macs, Homebrew installs to the /usr/local/bin directory, so you don't need to take any extra steps to set it up. On Apple Silicon Macs, Homebrew needs to be installed in the /opt/homebrew folder. Since it's not a part of the default PATH, you'll need to create a ~/.zprofile file that has a command for setting up Homebrew.

Put it more simply, to install Homebrew on your Apple Silicon Mac, you'll need two extra command lines than installing it on an Intel-based Mac. Follow the instructions shown in the Terminal, and run these two commands one by one:

By running the above two command lines, the Homebrew will be installed on your Apple Silicon Mac.

Though you've installed Homebrew on your Mac, there are a few things you should know, that is, Homebrew collects some of your data and sends it back to developers, such as the Homebrew user agent, Google Analytics version, and Homebrew analytics user ID.

In this situation, if you do not want any of your data to be collected and shared with Homebrew developers, you can follow these steps:

Set up Homebrew on your Mac

To get started using Homebrew, you can type "brew help" in Terminal, and hit Return. After doing that, you will see a list of commands that helps you install, update, and remove software through Homebrew. Also, there are a few troubleshooting commands you can take note of to fix some issues you may encounter when using Homebrew in the future, like "brew doctor". 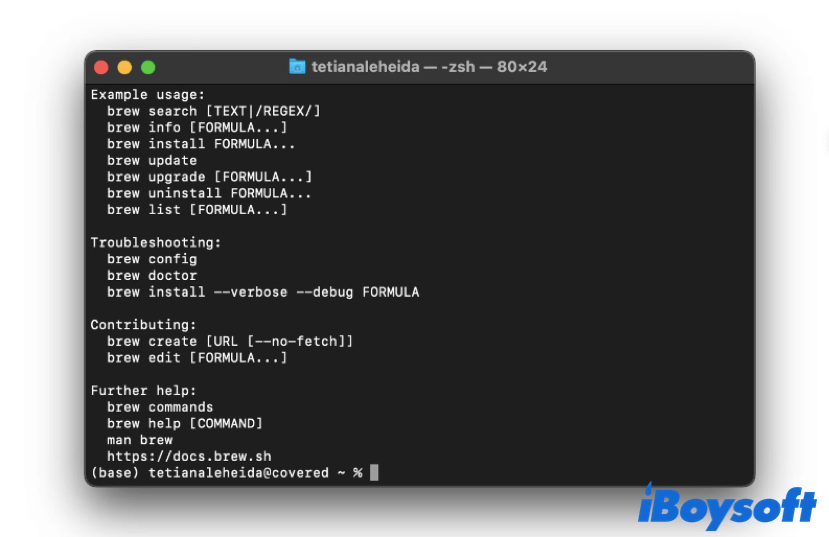 After the Homebrew installation on Mac, we will show you some easy ways to use this amazing package manager such as changing zsh to bash on Mac.

To Install packages through Homebrew on your Mac, you can run the following syntax in Terminal, remember to replace the [package name] with the name of the wanted package.

To update packages, you can run the following command to see a list of packages that need updating:

Then, use the following syntax to update the outdated package:

Apart from outdated packages, the package manager itself needs to be updated regularly to make sure it functions properly. To check if there's a latest Homebrew version, run this syntax in Terminal:

If you want to uninstall or remove some packages, you can make it by running either of the following command lines, both of them achieve the same goal:

Do not forget to replace the [package name] with the specific name of the package that you want to remove from your device.

Know how to install Homebrew on Mac now? If you've installed it successfully, share this guide with more people who need it!

How to uninstall Homebrew on Mac?

In this article, we tell you what is Homebrew and how to install Homebrew on Mac. Also, it teaches you how to uninstall Homebrew as well. Hope you can install it successfully on your devices, and enjoy this remarkable package manager! 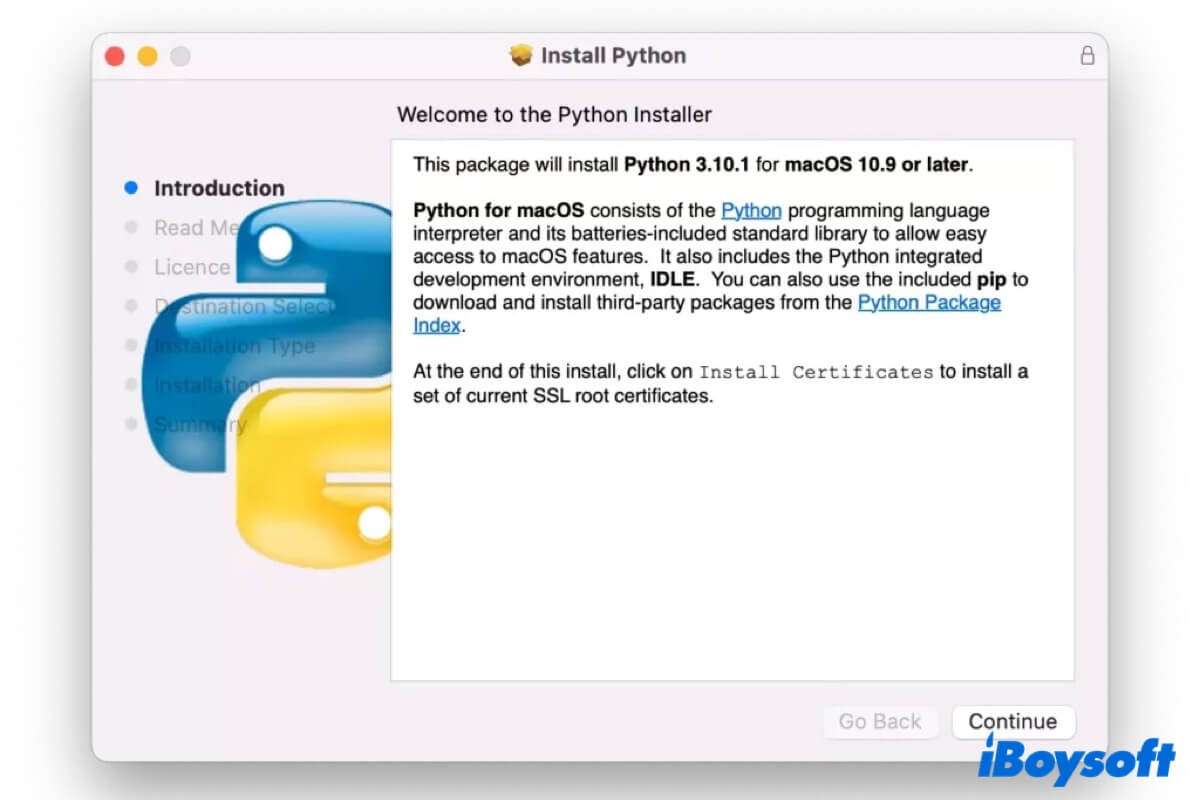 This article provides two ways to install Python on Mac, you can either install it from the official installer, or install it through Homebrew. Read more >>

FAQ about how to install Homebrew on Mac

QWhere is Homebrew installed on Mac M1?
A

If you install Homebrew on an M1 Mac, or other Apple Silicon Macs, then Homebrew will be installed in /opt/homebrew/bin. Since /opt/homebrew/bin is not included in your PATH by default, you should add it manually. You can follow the guide above to add it, or, you can visit Homebrew's documentation on the official website for detailed information.

QHow do I know if Homebrew is installed on my Mac?
A

QIs Homebrew necessary for Mac?
A

Generally speaking, Homebrew is not necessary for most Mac users. Homebrew is a package manager for macOS, some free and open-source programs can function properly because of its help. Also, most of the said programs can't run without the Homebrew installed on Mac. If you are a developer or people who are excited about software that is not available on App Store, then Homebrew is perfect for you.