An Overview of HFS+: Structures and Features, exFAT vs. HFS+ vs. NTFS

Summary: This post explains what HFS+ is, and what HFS+ is used for. It also tells you about HFS+ structures and compares HFS+ with Windows file systems such as exFAT and NTFS. 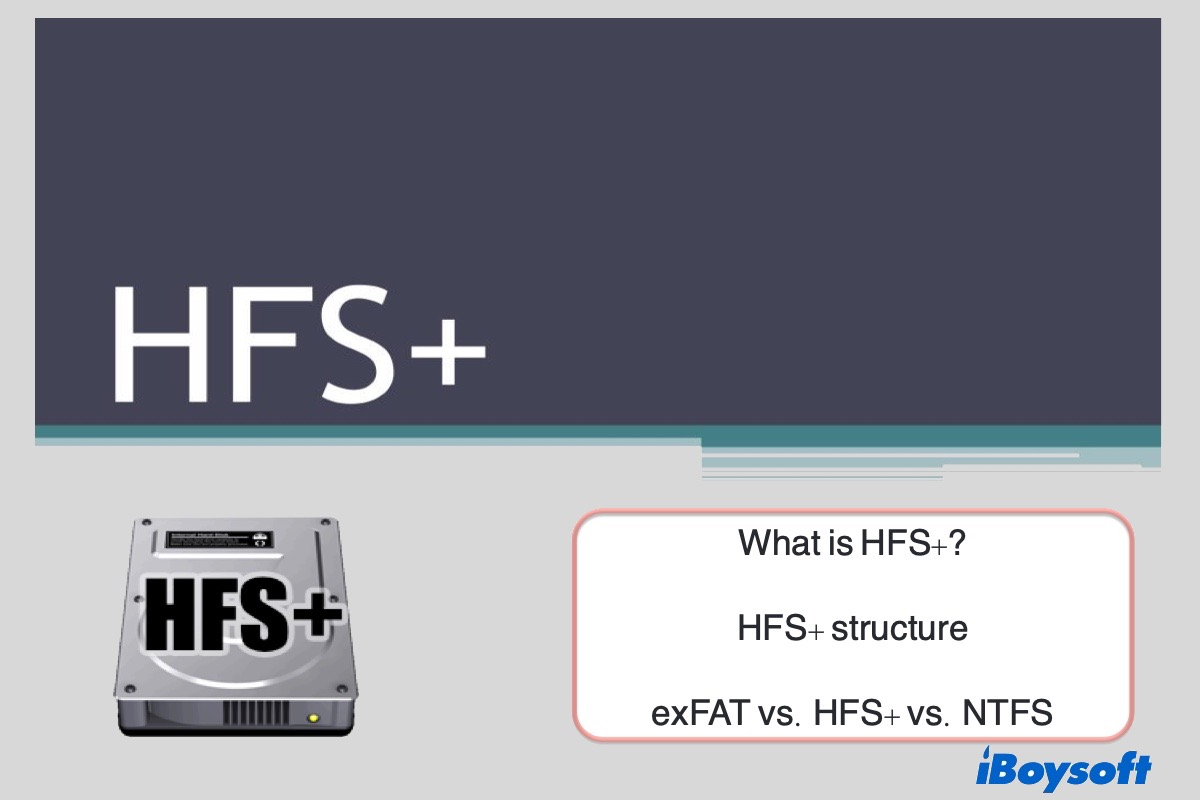 As the default file system on Mac before APFS, you may see or hear of HFS+ often but wonder what it is and how it differs from other file systems like exFAT and NTFS. This post got you covered.

HFS+, also referred to as HFS plus, Mac OS Extended, or HFS Extended, has been the primary journaling file system of the Mac OS X series since the release of Mac OS 8.1 in 1998. You will often see it on Mac named Mac OS Extended (Journaled).

When Apple launched macOS High Sierra in 2017, they replaced HFS+ with APFS (Apple File System), a disk format optimized for SSDs. Nevertheless, HFS+ remains a popular Mac disk format due to its compatibility.

You can't read or write to a Mac-formatted external hard drive on a Windows PC because your Mac drive is usually formatted with HFS+ or APFS, which is incompatible with Windows.

To find out if your file system is HFS+ or APFS:

On your Mac, click Launchpad > Other folder, then choose the Disk Utility app. Click View > Show All Devices, then select your drive from the left panel. Now you can see the file system listed under your drive name on the pop-up window. 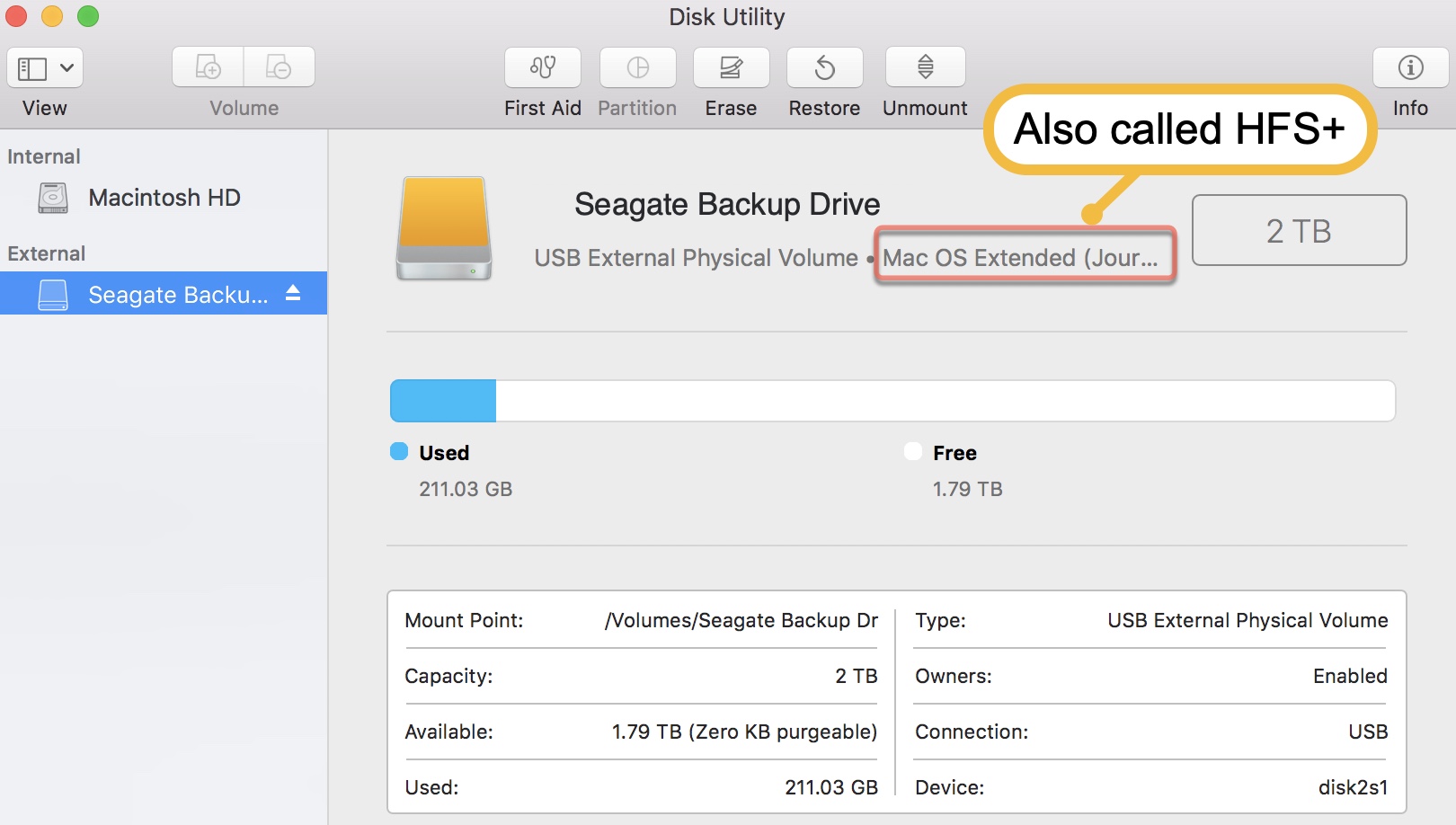 Volume Header: Store information about the volume, such as creation time and the number of files.

Allocation File (bitmap): Track if an allocation block is used or free.

Catalog File: B-tree that describes the folder and file structure on a volume. It stores the first eight extents of each fork.

Extents Overflow File: B-tree for the rest of the extents that catalog file doesn't store.

What is HFS+ used for?

HFS+ is a file system that is significant for making full use of a storage device and how data is retrieved and saved. It creates a directory that expands as files are added to the drive and records metadata and file names. Without file systems like HFS+, saving a file to a drive is like throwing a rock into the sea, impossible to be found.

Better use of Disk Space

Maximum number of files in a volume: 2.1 billion

Maximum size of a file and a volume: 8 EB

HFS+ employs UTF-16 to encode files and folders and permits file names up to 255 characters, making it easier to have a descriptive name.

Despite all of its benefits, HFS+ is criticized for the lack of standard features to other file systems such as checksums, snapshotting, and nanosecond timestamp.

exFAT (Extended File Allocation Table), developed by Microsoft in 2006, is the best cross-platform file system that can be read or written by macOS and Windows.

The maximum volume size and file size of exFAT is 128 PB, which is smaller than HFS+. exFAT is also vulnerable to file corruption and doesn't have support for metadata like HFS+. Read to know exFAT on Mac.

NTFS (New Technology File System), introduced by Microsoft in 1993, is the default file system of Windows PCs. macOS can only read an NTFS-formatted drive.

NTFS can support volume size and file size up to 8 PB on Windows server 2019 and later, which is less than HFS+. Both HFS+ and NTFS are journaling file systems and support hard links to directories.

QHow do I open an HFS+ hard drive in Windows?
A

You can use either one of the following methods to open an HFS+ formatted hard drive in Windows:
1. Install Apple HFS+ Drivers to read the drive.
2. Reformat your drive with a Windows-based file system for read-write access.
3. Use third-party software such as MacDrive or Paragon HFS+ for Windows.

QWhich format is best for Mac external drive?
A

QHow do I format a drive to HFS+ on a Mac?
A

You can format a drive to HFS+ on Mac with Disk Utility by plugging in the drive, select it in Disk Utility, and then click Erase.

No, HFS+ is a Mac file system. It's not supported on Windows.

How secure is the macOS APFS encryption?

Want to know how APFS encryption performs in terms of security? Check this post to find the answer.

How can I transfer large files to an external hard drive faster?

Read to know tips to speed up transfer of large files to an external hard drive on Windows and macOS.

How to Move Files to an External Hard Drive to Clear My Computer Space?

This post tells you how to move files to an external hard drive to clear the space on your computer.

I don't have an 'Erase All Content and Settings' button. How do I factory reset my Mac?

This thread tells you how to factory reset a Mac with detailed steps, applicable to all Intel-based Macs.

Will My Computer Last Longer If I Move All Files to an External Hard Drive?

This post tells you will your computer work longer if you move all the files to an external hard drive.