Fusion Drive vs. SSD vs. HDD

Fusion Drive vs. SSD vs. HDD

Summary: This post explains the definition, working principle, components, and features of Fusion drive, SSD, and HDD. After reading, you will be able to choose the best drive for yourself. There are also some anecdotes of the Mac Fusion drive. 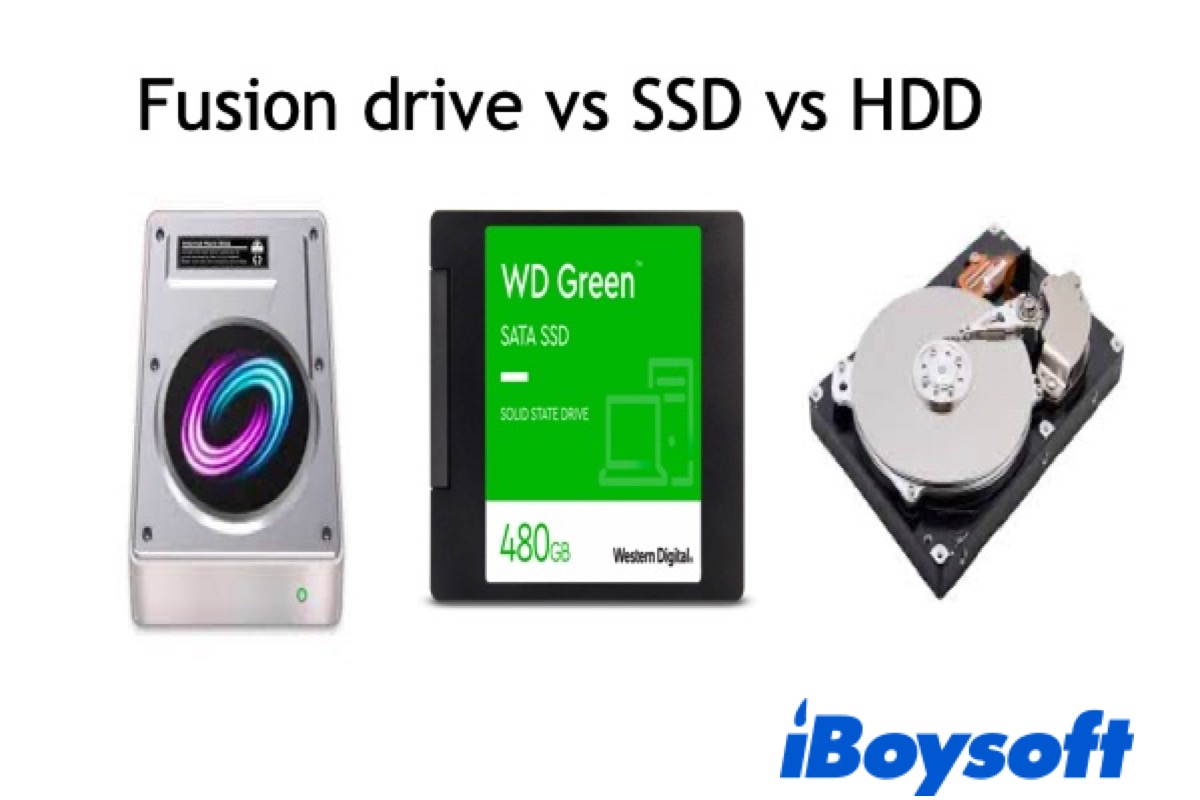 Part 2: Fusion Drive vs. SSD vs. HDD, for your Mac, which is the best choice?

• SSD home court: frequently used files, but not particular about the capacity

The common SSD read/write speed in 2020 can be easily at 500MB/s, which means a medium-sized software like, PS, AU, AI, and AE can be read and loaded in no more than 10 seconds.

Its speed as well reflects in compressing/decompressing files. You can even count how many seconds it cost to do that. As for those people who are working with complex design software that needs complex operations like complex Adobe family, Lightroom, Logic Pro X, and TinkerCAD, I suppose none of them would like to spend time and money in watching the crushed workspace and a wait-for-response window.

Attention please, when the capacity isn't that a demanding factor, the more frequently you use the files, the more necessarily you should put them in the SSD!

• HDD home court: large-sized but not so frequently used files

The HDD is not out of data only if there is someone who needs storage capacity over 4T to store the infrequently used data (most of the common SSD for the ordinary people can store files no larger than 4T for the time being) and is not always after the I/O performance like music listening, picture browsing, and video watching.

The HDD shows its privilege off incisively and vividly in the field of low unit storage cost for that of the same capacity, the SSD storage unit cost is four times as much as the HDD storage unit.

Moreover, once bought SSD could lose its youth and speed or even some fatal data when used for years whereas no similar worries are needed about an HDD, because the HDD is relatively long-life, stable, safe, and always serve loyally for its lord with the almost silent sigh of the spinning platter and it will always say:

"Let me keep your most important things."

• Fusion drive home court: Compromise for both speed and capacity

To satisfy these people who want to enjoy both the speed of the SSD and the capacity of the HDD on Mac, the fusion drive technology is first implemented by Apple on October 23, 2012, with the first supporting products being two desktops: the iMac and Mac mini. So, what's the best usage of the fusion drive?

As the SSD part of a fusion drive is quite limited, then all you need to do is put the small-sized and frequently-used data in the SSD part to enjoy its speed, like the operating system files (it's a must), office software files, and the browser profiles while place the large-sized and infrequently used data like downloaded movies, OS files backup, old pictures, and songs in the HDD to enjoy its capacity.

Bonus Part of the fusion drive

• Removal and installation of the fusion drive

Except for Mac and other few products, Apple has nearly sealed all its computers' hard drives to the motherboard, like MacBook Pro and MacBook Air, and made its unique disk interface which is unworkable with non-apple hard drives since 2012. So, the Mac survived to free remove and install its hard drive.

But unfortunately, the 2020 27inch Mac has done the same things, which marks Apple has finished its hard drive sealing mission on all Mac computers. So, think twice about the fusion drive scheme when you plan to buy a Mac, asking yourself how you would like to use it because the hard drive is non-upgradable and irreversible.

• Maintenance of the fusion drive

The main parts, including the motherboard, CPU, RAM, hard drive, GPU, and power source, of the Mac branded products have a two-year warranty plus a 90 days of tech support. If your Mac fusion drive needs repairing when it's beyond the warranty period, well, man you get in trouble. A national average price range for hard drive repair or replacement is about $159-$459.

• Some anecdotes of the fusion drive

Because the Mac fusion drive is much more superior than any other hybrid hard drives in the algorithm. The more power algorithm gives birth to the fusion drive the faster read and write speed.

② Only a hybrid hard drive that is made by Apple or made and used in a Mac can be called a fusion drive. The fusion drive is unique to Apple.

③ The fusion drive is in-built when you order a Mac, and usually there are four selections: 1T fusion drive, 256G SSD, 512G SSD, and 1T SSD.

④ The fusion drive doesn't have a bright future because it is not as good as what it seems to be.

Under this situation, the fusion drive is not worth the compromise for both the higher cost than the HDD and much lower speed than the SSD.

By the way, the price of the SSD has fallen dramatically in recent years, and the trend is on and on as well as its quality has been far more prompted compared with that of a couple of years ago. Personally speaking, it's not a wise choice for most of the ordinary people in 2020.

For example, the iMac failure of either the SSD part or the HDD part can sentence a death penalty that all your data is gone forever

Now that SSD has become the Tik Tok in the field of the hard drive in 2020, how can other types of hard drive survive? What will the world of hard drives be like in the near future? If you have any interesting ideas or good advice, you're welcome to leave your comments right below or communicate with us through the mailbox. Our email: support@iboysoft.com. Thank you for your reading!