MacBook vs. Windows PC (Why macOS is better than Windows)

Mac vs. PC Pros and Cons of Operating Systems[2022]

Computers have become such an essential part of our daily lives that almost everyone has one. Whether you prefer a Mac or Windows PC, you are likely curious about which operating system stands out in the MacBook vs. Windows PC battle. This post spells out the popular opinions of both sides and tells you why macOS is better than Windows.

Drawbacks and Benefits of a Mac vs. Windows PC

Apple's operating systems have been gaining market share over the years, but Windows still dominates the desktop OS market with around 74% of the share. But why there are so many users consider Mac better than Windows? Here are the Mac vs. PC pros and cons. 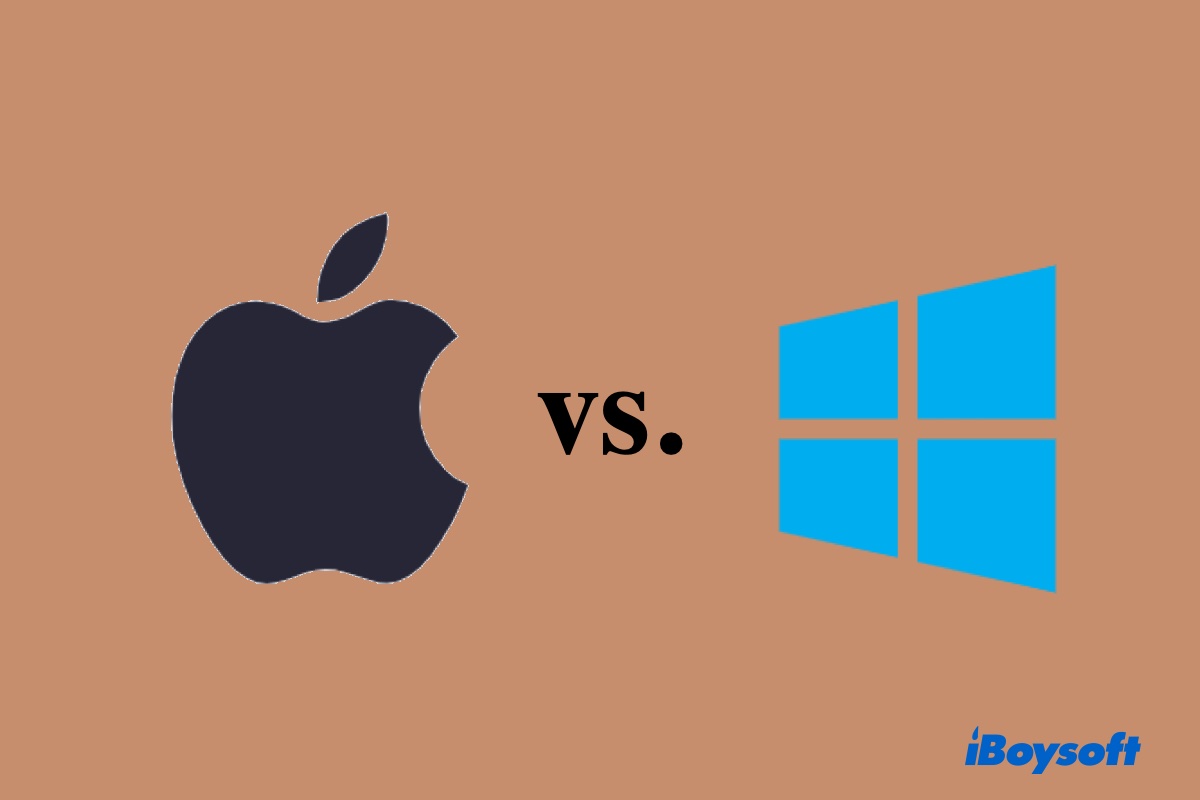 Many cross-platform users will tell you that they think Mac computers perform better and are less likely to get virus infections and errors than Windows PCs.

Although performance isn't an easy metric to qualify, one possible reason making a Mac run faster than a PC is that macOS is specifically designed for the hardware Macs use, but Windows needs to accommodate hardware of different specifications. In addition, the launch of Apple's homemade M1 chips further reinforces the performance.

Unlike Windows that's designed for a general purpose, macOS is also optimized for a particular workflow. Mac's Retina display is another great thing that graphic designers and those into arts and visual elements find appealing.

Apart from that, Apple lets you install windows on Mac with Boot Camp Assistant (only on Intel Macs) if you want all the benefits of a Mac but also use Windows for some situations.

Users who consider Mac less desirable prefer not to be locked down in the Apple Ecosystem and embrace the freedom to customize and upgrade their own parts. Since Windows is generally used in most computers, you can almost get one at any price point. Thus people with different budgets can find a good fit.

For those who prioritize convenience, Windows also has the best 2-in-1 computers (Surface Pro vs. MacBook Pro) that allow you to transfer between tablet and computer modes. Game players also favor Windows PCs because they are less expensive and more compatible than Macs. Besides, Windows has excellent backward compatibility that allows you to run old programs on newer OS.

Why macOS is better than Windows?

The argument between macOS and Windows has existed for a long time. Although whether one thrives another depends on the user's personal experience, for the most part, users believe macOS is better than Windows because it provides a smoother experience, higher security, and productivity. Also, each macOS update works easier on the eyes and adds more efficient features without being obtrusive.

macOS is more user-friendly than Windows.

When people start to use Mac, what impresses them most is how intuitive and easy-to-use the operating system is. If you just come from Windows, you may need time to adapt. But once you get used to macOS, everything is clean and elegant.

Customizing apps are so easy with the top menu bar. When you have to change system settings, you know you can rely on the System Preferences app, unlike Windows, which scatters settings to the Settings app and Control Panel. Finder also makes locating files and folders more efficient than Windows File Explorer.

macOS has seamless integration with other Apple products.

Apple's efforts to move more iOS apps to Macs and strengthen the tie between Macs and other Apple devices are what Windows computers lack. Thanks to the Hand-off feature, users can seamlessly continue what they were doing on the iPhone on Mac. On top of that, macOS Monterey introduces a further enhancement by allowing people to manage nearby Apple devices with a single mouse and keyboard.

Although Windows has software available for various tasks, they often don't come with the computer and need to be paid for. macOS has a collection of useful tools that helps you edit photos, videos, and music without even downloading them.

Is macOS faster than Windows 10?

macOS truly has many advantages over Windows and vice versa, but is macOS faster than Windows 10? The answer may be a big yes for Mac lovers because that's how they feel while using macOS on Macs and Windows on PCs. However, there are different voices from users utilizing the good of both sides.

The best way to know if macOS is faster than Windows 10 is to run them on the same device to cut off the influence of hardware.

Phoronix did some tests on a MacBook running Windows 10, macOS 10.15, and Ubuntu 19.10. They found that "Of the 86 benchmarks carried out across all three operating systems, Ubuntu 19.10 was the fastest 48% of the time followed by Windows 10 with leads 31% of the time and macOS 10.15 at just under 20%." This result is also echoed by posts from Reddit and the Macrumors forum.

Is Mac better than Windows for students?

Not really. Whether one is better depends on what you need them to do. If you work in graphic design, photo-editing, or video production, Mac is likely a better choice because relevant software is prepared for Macs before the PCs since most creative people use Macs.

But is Mac better than Windows for gaming?

Although Mac is setting its eyes on the gaming world, Windows computers still beat Macs on that.